No comments
I used to bake bread, mainly out of desperation of the quality of bread here. We Germans like our bread. It is something Icelandic people might not understand, but this is because their bread sucks. Usually it is just toast, even if it cosplays as bread in the supermarket. The fancy bread you can find is french style, which is ok, if you like eating air. German bread is a meal in itself. Dinner is called "evening bread" Abendbrot. Any other time one has a meal consisting of bread, meat, cheeses etc. it is called "bread time" Brotzeit. The heart of it all is the Butterbrot (butter bread, the concept of a slice of bread with butter and any other cold cuts or spreads.

When Germans start being accurate, there’s no end to it!

Tolstoy knows what's up. And yes, I'm actually reading War and Peace and am now using an excuse to talk about it. As this quote is from the battle of Austerlitz, he is actually talking about Austrian generals here. It is quite interesting, German is used in the book the way we use "Slavic" today, signifying a group of people with linguistic and cultural similarities. Obviously, in 1805 Germany did not exist yet and while Bavaria had been overrun by Napoleon both Prussia and Saxony had not joined the coalition yet. And I will stop now, before I start talking about similarities between the ideological developments of the characters in War and Peace (and their implied connection to the Decembrist revolt) and the March Revolution in 1948.

None of this has anything to do with the word kleinkariert (adj.). It translates literally as small checkered, but means being knit picky, detailed oriented and petty. It is not as adversarial as Korinthenkacker, but by no means a compliment.
This concludes my series on all the variations of Spießer. The only thing left to do is post a link to a scene of my favourite Asterix movie, a perfect play on the joys of bureaucracy.

No comments
Last summer I finally made it back to Germany after being stuck in Iceland thanks to Covid. The first two weeks me and my family went to Belgium, staying in the same summer house we used to stay in when we were kids. We had perfect summer weather, the waffles were as good as I remembered and the whole trip was very laid back and relaxing. My father and his wife stayed for one more week, this time with the wife side of the family and I stayed in my fathers place. The first day I just walked around in the fields, went to coffee and cake at my sisters, and relaxed in the sun a lot. Summer holiday seemed to be turning out amazing...

The day after I decided to take care of all my banking business. In Iceland everything is possible to do online, but in Germany they like to make you go to the bank in person. Usually that is not so much of an issue, the bank has a branch just across the street, but the internet told me it was still closed, due to covid. So I had to go to a different branch. But not any branch! As I found out German bureaucracy is especially potent in the banking industry, the branch of Aachen, the town 20 minutes away by bus was another department, only a branch of my particular area would do. So I had to make my way to the small provincial town of Stolberg, where I went to high school. After another 20 minute bus ride I arrived. The town had only gotten sadder in the past 20 years. I found out that banks in Germany take a one and half hour lunch break, which I arrived half an hour into. I walked around for an hour, saw a lot of empty store fronts, some 1€ stores, tanning saloons and finally a bakery to spent the rest of the hour drinking coffee, reliving high school memories and congratulating me for having escaped this town. When the bank finally opened I took care of all my banking business looking forward to escaping the town and not coming back. When I finally came home it had started raining, so I retreated inside with my book.

The rain kept on going. Our part of Germany is quite famous for rain, so I did not think much of it. Late at night suddenly the electricity went out. It was pitch dark, the street lights outside had gone out as well. There was a strange noise coming from the living room. I turned on the light from my phone (30% charge, no network) and looked around for a weapon. All I could find was the rod of the vacuum cleaner. I held it in one hand, phone in the other and stormed in the living room. My fathers roomba had lost the connection with it's charging station due to the black out and was moving around the living room, searching for it. I caught it and switched it off.
Neighbours had come out on the street and turned on their cars, which confused me. The next day it dawned on me that they were listening to the radio in their cars and charging their phones. Meanwhile I went looking for candles and matches. In an attempt to make his flat into something of an escape room, my father did not keep these objects together, but in completely different rooms of the flat. I finally found them, put them next to my bed and then decided there was really nothing else to do but sleep. My guess was that a tree had fallen over in the rain and had taken out an electric line. I fully expected it to be back in the morning. I was very wrong.

The next day the electricity wasn't back. My Icelandic phone was useless, as routing somehow required something now disconnected. Not being able to reach me over phone, my sister came over in person. She had been in contact with both my father and brother and was tasked with checking on basements (both my fathers and brothers basement were relying on pumps to keep groundwater out. Pumps which needed electricity to work). By their demeanor she suspected something more than a temporary loss of electricity was going on. Her phone was quickly running out of battery, too. We went to my brothers and checked on the basement. The only water came from the rapidly defrosting freezer, which we got rid of quickly. We decided to go back to her house and make some coffee on her camping cooker. On the way we listened to the radio in the car. It was worse than we could have ever imagined.

My village is on a hill. I never before appreciated that fact. For this reason we were spared from the flood that was destroying villages and towns around us. Little brooks had become rivers. Houses were flooded up to the second floor. Warnings had been given too late, but even in places were there had been warning, the usual preparations (sandbags in front of windows) did very little against a flood more than twice as severe as ever before. As the morning progressed the sun came out and birds were singing. It was a perfectly lovely summer day. The sirens from the emergency services driving to towns around us were a constant reminder that the sunny idyll was only an illusion. My sister drove to pick up her youngest son from summer camp, the damn she drove over was deemed unstable a few hours later, the villages under the reservoir evacuated. We used to go and watch fireworks at this reservoir. Stolberg was one of the worst affected. On the way from the bus station to my high school I had always crossed the bridge over the little brook far below. Now it had flooded the centre of town I had loathed to spent an hour in a day ago.

My emotional Nadir happened a few days later. The electricity was still gone and we had to use bottled water instead of tap water. Oil fired central heating is common in our area and the boilers in the basements had been flooded, causing oil to leak into the groundwater. Our days were quiet, but felt a bit post-apocalyptic. Evenings were spent playing board games in candlelight (my sister said it was the first time since forever that she had sat down with her kids and played a game, usually they would vanish into their rooms and in front of their computers) and coffee cooked on my sisters camping cooker was a luxury. We had developed a system of charging our phones in the car, while listening to news. My phone was still not connecting, though. I was looking forward to going to Aachen to meet my friend. Aachen had electricity. Aachen had wifi. I could finally tell everyone I was ok. Before I left for the town (my father had checked which roads were possible to travel again) his wife reminded me to take masks with me. I suddenly felt endlessly exhausted. There was still a pandemic going on. I wonder if there is something like a catastrophe burn out. 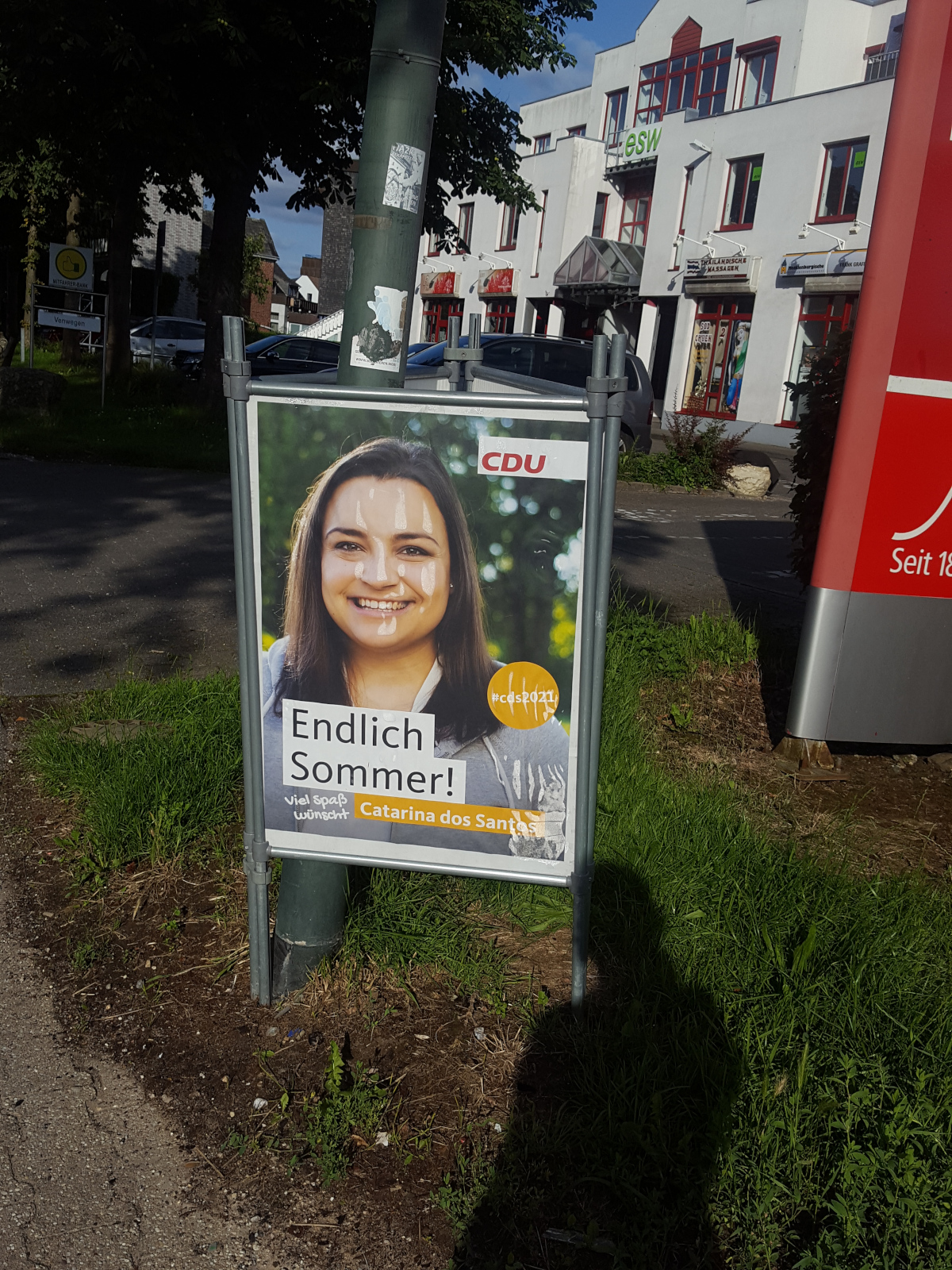 The poster sais "Finally summer!". It is from the CDU (German Democratic Party) who had been in power for the last 16 years and had distinguished itself by non-action when it came to climate change, missing the opportunity to switch to renewable energy as opposed to fossil fuels (mainly due to lobbying from the coal industry).

No comments
I love going through the posts in the German Reddit group. There is always one post with an example of extreme Germaness, usually some petty fight between neighbours about the correct way to recycle, slightly crooked doormats or "unkempt" looking gardens. There is a reason we do not only have the word Spießer, but also define several subspecies. There is a level of severity to consider. Spießer can be as neutral or sever as the speaker chooses. A Erbsenzähler is more of a nuisance than actively antagonistic, they just really like going over every little detail. But if someone is pedantic about the smallest rules and regulation out of sheer pettiness and in an active attempt to make you miserable a stronger word is needed. This is where the Korinthenkacker comes in. It translates to "someone who shits small raisins". The word itself is pedantic, it is not just someone who shits raisins, it is someone who shits "Korinthen" a particular kind of small raisins. The Wikipedia article lists several local variations, because of course we have those, too. Our dutch neighbours also use the word (Krentenkakker), but there it is a stingy person, like Erbsenzähler used to be in German. It is one of the many examples where Dutch people use words wrong, which at some point should be it's own series of blog posts.

No comments
I'm probably thinking of the word because I made lentils the other day. A Erbsenzähler (pea counter) is an overly pedantic person. It is a subspecies of the Spießer. In the good old days it was also used for a stingy person, but these days it refers to people who end up working for government institutions, so that they can deny your applications because of the smallest technicalities.