No comments
Segull 67 is a small family brewery in Siglufjörður, in the north of Iceland, which was founded in 2015. They brew their beer in a repurposed fish factory and sound like a cool place to visit when in the north. Here is their homepage.

They have two Christmas beers, an amber ale and a mandarin session IPA. The amber ale is a solid beer, the malted barley gives it a warmer taste, as you would expect from a winter beer. The IPA tastes a sweet from the added mandarins and light, more like a summer beer. I do not particularly like IPAs, so I definitely prefer the amber ale, but I think if IPAs are your thing, it is worth checking out. The mandarins and hoppy taste of the IPA go well together.

No comments
I think it is fitting to start the Christmas beer adventure with a micro-brewery called "Álfur" (elf). It is a young brewery, founded in summer 2018. They specialize in brewing beer out of potato peelings, a waste product of Icelandic potato farming. While I love the angle of sustainability and using local products, I was a bit skeptical. As a German I am culturally inclined to dismiss any beer not brewed according to the "Reinheitsgebot". 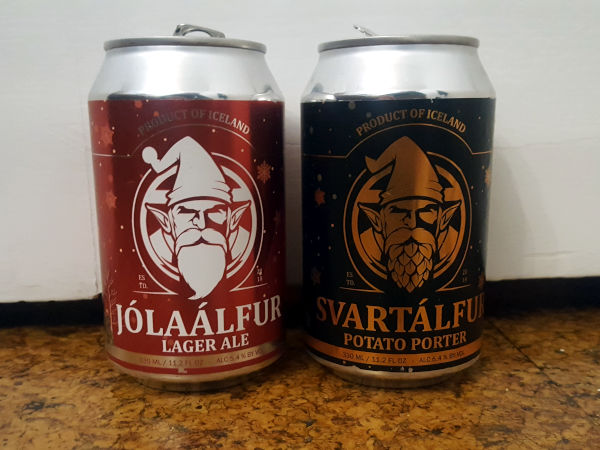 They have two Christmas beers, Jólaálfur (a lager) and Svartálfur (a potato porter). I tried the Jólaálfur first and really liked it. I is a darker, richer lager (which is exactly the kind I like), which might be due to the added potato peel, but I could not tell. It is a solid lager. Svartálfur is a porter and a bit to rough for my taste. I prefer my porter to be heavier on the caramelized malt. However, this was just a personal preference, if you like bitter, dark beer, it is a decent option.

Álfur sucessfully defeated my skepticism about potatoes in beer. I really like their focus on local ingredients and sustainability and they seem to know what they are doing. Here is their Facebook (they have no website). Check them out.

Christmas beer - once more with feeling

No comments
5 years ago I tried all kinds of Icelandic Christmas beers and rated them. The results can be seen here. This year, to celebrate my blog coming back to live and to distract myself from the fact that I won't be coming home for Christmas, I decided to do the whole beer tasting again. I figured, that after five years , there will be some new beers to try. So I went on the webpage of the Icelandic state alcohol store, went to the category "Jólabjór", selcted "Iceland" as country of origin and ended up with 66 beers!

To prevent alcohol poisoning I decided to exclude beers from major breweries and focus on microbreweries only. There have been A LOT of new microbreweries, in 2015 there were maybe 6, now there are 18. They all have more than one Christmas beer, so there are still about 40 beers left, even with leaving out the ones that have not changed since 2015.

I will not rate the beer this time, there is no better Christmas beer than Jóla Kaldi Chocolate Porter. Instead, I'll introduce each brewery, their Christmas beers and comments from whichever friends I can rope into this.

No comments
This year a few new Christmas beers were released from Icelandic breweries, providing an opportunity for me to have a beer tasting with my friends again. A lot of the new beers were dark beers, porters and bocks, probably due to the popularity of the Einstök Christmas beer last year. 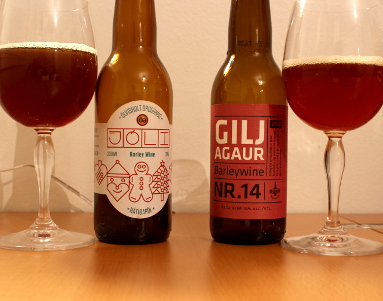 Barleywines are very strong beer (around 10% alcohol) , which is why they are called wine despite being a beer. The high alcohol content and the fact that some of us had already had cocktails (not me

) lead to some flowery descriptions.

The first we had was Giljagaur from Borg brewery. Last Christmas they had Þvörusleikir, a beer that had my respect, despite it not being the type of beer I enjoy and which my flatmate really liked. Giljagaur is the second of the Jule Lads. He sneaks into cowsheds to steal milk.
The barleywine tastes like you know that Christmas is coming, but it is still some time away (my other flatmate had a poetic day). One can compare it to a dark winter night, according to another friend of mine who jumped on the whole being poetic about beer bandwagon. It is a low carbonated beer with a nice balance of bitter and sweet. There are slight hints of caramel and licorice in the sweet tones and not much of an aftertaste.

Jóli Barley Wine from Ölvisholt brewery had the nicer label, though it is a bit confusing as it is the same label and name as the Jóli Christmas Beer last year, which isn't the same as this one.
It inspired more beer poetry from my friends: "It tastes like Christmas morning with fresh snow. The Christmas tree is in the basement and there is a fire in the fireplace." Yet they actually liked it less than the beer before. There is a lot going on here, it is slightly citrusy with an oaky aftertaste, which might be nice, however it gets overpowered by the bitterness.

RIP wine glass, killed by Jeff and our dishwasher.

My (actually ex) flatmate and me decided to skip on going swimming and have more Christmas beers instead. We tried to be as poetic as the guys had been at the last tasting, but did not really succeed, maybe because we only had two 33ml beers with 6-7% alcohol for the both of us.

Potaskefill is another beer from Borg brewery and named after the Jule Lad which licks the pots after everyone had gone to bed. It is a "Brown Beer?" according to the label and confused Mariska who was in vain looking for something Christmassy about it. The description claims it has caramel, chocolate and coffee notes, none of us tasted them. It has a murky dark colour, is little carbonated and has a nice foam crown (as a German I appreciate beer foam). After I finished my glass and some effort I decided it tastes like the smell of pine. It is not bad, not too bitter, not too sweet, a beer you can give to everyone and which will be liked and then forgotten. Meh.

Boli a doppelbock from the mother company of Borg brewery and biggest beverage company in Iceland, Egills, was more memorable. You might want to drink this beer after a walk in the snow in front of a fire while the wind is howling outside. Ok, half a beer and poetry happens with me, in Icelandic they call this "hænuhaus" (chickenhead). Not that having a low tolerance for alcohol is a bad thing in a country where any of these 33cl bottles of Christmas beer cost something between 2-3 €.
Boli has a clear dark colour, is medium carbonated and has another nice foam crown (maybe I just get better at pouring?). The outstanding taste here is the smokey flavour. It is quite mild though and balanced out by the slightly sweet licorice taste. It isn't a beer I would drink all night, but I would enjoy a glass with my dessert. 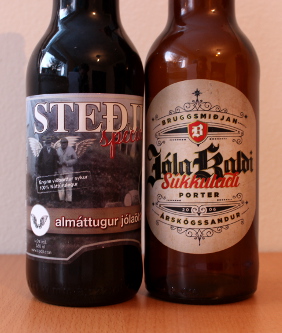 Jóla Kaldi Chocolate Porter was a beer I was excited about because a) chocolate and b) Jóla Kaldi was my favourite Christmas beer last year. It tastes like very dark chocolate (more bitter than sweet). Case closed, we can go home now, we have a winner. What there is still a licorice beer to be reviewed? Well I guess if I have to (my flatmate, who I still refuse to call ex-flatmate refused to give up the chocolate beer for science).

Steðji almáttugur jólaöl is the darker sibling of the Steðji Jólabjór which positively surprised me last year. Unfortunately here the licorice did not work out. The beer smells repugnant (can licorice rot?) It tastes like weirdly bitter licorice. This is the worst of the licorice added beers and the worst of the ones tried this year. Sorry Steðji.


My favourite Christmas beer is still Jóla Kaldi, but Jóla Kaldi Chocolate Porter comes as a second and I prefer it over Einstök Icelandic Doppelbock, which I found a bit sweet.