No comments
Steðji is one of the older micro-breweries in Iceland, based near Borgarfjörður in the South West and one of the places we had planned to visit several times during trips around Reykjavik, but never managed to. They featured on both the previous Christmas beer sagas on this blog, one time with a licorice beer I really liked and the other time one I really hated. This is an apt representation of the roller coaster of emotions that their beer can be, they make good beer with a lot of craft and natural spring water, but beware, sometimes they use milled whale bones or smoked sheep testicles as ingredients. Taking "made with Icelandic ingredients" to the extreme.

The Christmas beer I really liked is now part of their general line up (and called Northern Lights). The one I did not like, Almáttugur, a porter with licorice, is still one of their two Christmas beers and I decided I do not need to do that to myself again. The other Christmas beer is Halelúja a German Schwarzbier. It really shows their craft. Using only malted barley, hops and water (as it should be!) it has coffee and chocolate notes, while being light and perfectly balanced. One of my favourite of the ones I tried this year.

No comments
Here we have another micro-brewery in a remote small town ruled by the fishing industry and with a strong regional identity. The Brothers' Brewery was formed 2012 on the Vestmann Islands, off the south coast of Iceland by two friends, who then involved their brothers (hence the name). Just like Dokkan they also have a tap room in the middle of town. Their website is here. 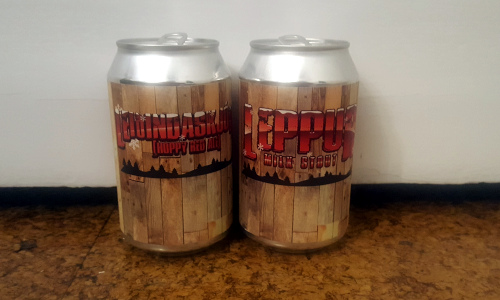 They have two Christmas beers this year: Leiðindaskjóða, a hoppy red ale and Leppur, a milk stout. They added oats to both beers, which finally motivated me to look up oats in beer brewing and why someone would do such a thing. Turns out, oats are used to build "the body" of the beer, meaning it helps all the other flavours develop, while not adding any flavours to the beer itself (unless malted). Still against the Reinheitsgebot, though.

That out of the way, how do they taste like? Leiðindaskjóða, the hoppy red ale does have a lot of flavour, underneath all the hops is a very rounded beer, with the right balance of slight sweetness from the malted barley and bitterness. It is also very carbonated, which I liked. If they ever make a red ale without the emphasis on hops, I would try that.
I also liked the stout Leppur, additionally to the oats a lot was added to it (coconut, vanilla and lactose again), but it harmonized really well and while it was creamy and sweet, not too much though. Now the real challenge is, could you guys achieve a good beer following the Reinheitsgebot :Þ?

No comments
In the old part of Ísafjörður, founded in 2017, the first brewery in the Westfjörds. Proudly made in and by the people of Ísafjörður, the water used to brew the beer is spring water from the mountains around Ísafjörður. Water quality is actually very important in beer making. Unsurprising considering it is the main ingredient. One of the reasons small breweries make better beer than industrial ones is because they often use spring water, something that cannot be replicated ones production moves world wide.

They have two Christmas beers, Jóla Drangi, an amber ale and Hátíðar Púki, a sweet stout. I got a bit of an identity crisis with this beer, I always considered myself a stout person, and yet again, I preferred the ale over the stout, just as with Álfur and Ölvisholt. Maybe it was because Púki is brewed with added lactose and I found the additional sweetness strange tasting. Jóla Drangi achieves it's amber colour with the malted barley, which also gives it it's smooth and slightly sweeter taste. Púki is surprisingly sweet and not very bitter for a stout (this is where the lactose comes in), but it feels a bit flat. Maybe the amber ale is simply better, because it is a variation of one of their flag ship beers (Drangi). They generally brew pale ales and lager style beers, all which you can taste in their tap room in their brewery in Ísafjörður. With a view of the mountains where the water for the beer comes from.

No comments
The Icelandic micro-brewery movement is somewhat of a sausage fest. This is where Lady Brewery comes in. It is a women run micro-brewery here in Reykjavik, founded in 2017. Being the only women run micro-brewery in Iceland is not their only selling point, though. They are dedicated to developing Icelandic beer, researching Icelandic ingredients in beer making their "experimental kitchen" and regularly releasing limited editions of new kinds of beer. They have a crowdfunding going on at the moment, check it out!

They have two Christmas beers, All That Glitters Ain't Gold Raspberry Ale, which only comes in a 750ml bottle and Tomorrow's Dreams an (to my disappointment) NEIPA.
I shared the raspberry ale with Jeff, my friend and probably the only person reading this blog, to celebrate his birthday. I absolutely did not bring the bottle as a birthday present, because I needed someone to share the 750ml of beer with and because I had forgotten it was his birthday and had no time to find another present. It is a very festive bottle though. You have to take my word for it, because I obviously left the empty bottle in his place, so no picture this time. All That Glitters Ain't Gold Raspberry Ale is supposed to be a fruit beer, but it is not very fruity. I found it a bit watery (I had expected it to be sweeter and more carbonated), Jeff found it a bit hoppy, we both did not taste the raspberry. We did finish the bottle, though.
Tomorrow's Dreams is a NEIPA, and another beer with oats in it. This is a disturbing trend in Icelandic beer making, why do you people keep adding oats? I might get used to IPA style beers, I actually liked the emphasis on the hops in this beer, it is more on the sweet than bitter side. I actually preferred it to the raspberry ale.

I'm a bit sad that both beers were not to my taste, I really like the concept of this brewery. I hope their crowdfunding is successful, I would be interested to try more of their (non IPA style) beer in the future. Stay away from the oats, though!

No comments
Finally some micro-breweries, which only released one Christmas beer. My liver thanks you.

Austri
Austri is a micro-brewery in Egilsstaðir, founded in 2017. They have their own taproom, so if you need something to do in Egilsstaðir, you can go beer tasting. Their Christmas beer is Romm í Jól a stout with rum mixed into it. It is not as strong as it tastes (6.3%) and as I prefer rum to whiskey I like it more than the bourbon beer from Ægir or the barrel aged barleywine from Ölvisholt. However, I found rum and stout does not go that well together.

Og Natúra
Og Natúra specializes in making drinks out of Icelandic berries and herbs. They are not only a brewery, but also make wine and spirits. If you are interested in all kind of drinks made of Icelandic herbs and berries, check them out here. I was highly skeptical of Jólo their "blueberry" and pine stout.
But first we have to talk about Icelandic "blueberries". They are a lie. They call them "bláber", but they are actually NOT blueberries, but bilberries, a completely different species, something I found out after 19 years in Iceland. This is not the first time Iceland is lying about plants, a few years back they were selling spinach, which was not spinach, but some other green leafy vegetable. You cannot trust anyone these days.
I liked the stout. It was slightly sweet (probably because of the bilberries) and I did not taste the pine at all. actually, it just tasted like a smooth, creamy stout. The beer might be a lie, but it is a tasty one.