I have started to make bread again, but have not gone all sourdough yet but am still using the recipes from the best damn bread making book ever, where breads made with yeast are concerned "The Bread Baker's Bible" ISBN: 9781843094135.
It has been sitting on my shelf the past 6 months, in my old place I did not feel like getting my bake on as my kitchen was also my bedroom.

My goal is to get back into my bread making vibe and to see which recipe might be good to adapt to sourdough. I'm also playing with vegan baking. The two breads I made were both recipes I had experimented with before and here are the updated recipes:

Granary Cob
The original uses Granary or Malthouse flour, flour with malted wheat flakes. I decided to add the malt flavour by using the Icelandic malt beer and wheat bran.

Pour the malt beer into the wheat bran. Let it sit 5 - 10 min to allow for the bran to get mushy.
Sift flour and salt together in a bowl. Make a well in the centre and add the water and yeast. Mix it with a little flour than add the bran/malt beer mixture. Mix to a dough. Knead for ten minutes.

Mix the salt and water and brush it over the bread. sprinkle with the oat flakes.

I was not completely happy with the bread, it could have used more salt and taste in general (even counting for the missing bran). I might try to use a rye sourdough starter and less yeast next time.

Vegan toast
I changed a recipe for a split tin bread into a toast recipe some time ago (adding butter and apple sauce) and now I decided to make it vegan, by using margarine instead of butter and almond milk instead of milk. It came out great.

Sift the flour and salt into a bowl. Make a well in the centre and add the water, milk and yeast. Mix some of the flour into the yeast mixture until you have a batter like dough. Sprinkle flour over it and let rest in a warm place for 20 min. It will start to bubble.

Add margarine and apple sauce. Mix with the remaining flour to a dough. Knead for 10 minutes. Let rest for about 1 hour or until double in bulk.

Lightly grease a loaf tin. Knock back the dough and shape into a rectangle the length of the tin. Fold the upper third of the rectangle down and the lower one up. Fold over, tug in the ends and place into the loaf tin.
Let rest for 20-30 minutes or until double in bulk in a warm place.

With a sharp knife make a cut through the length of the bread. Let rest for 10 minutes. Preheat the oven to 230°C

Bake for 15 minutes then reduce the temperature to 200°C and bake 20 minutes more. Turn out on a wire rack to cool. 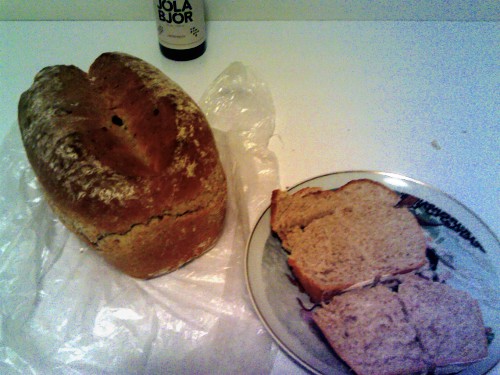 Now we only need a toaster...