bubbles, growth limits and why lava candle holders are funny

Economoholics
Icelandic economic culture dictates to cheer any bubble in the name of economic growth without thinking about such things as externalities, limits of growth or even basic planning. It is akin to the drinking culture, excessive to a point where any non-Icelander just stands by in confusion, wondering if the whole island has gone insane.
Any criticism is met in the same way as the suggestion that going horse riding after several bottles of vodka is not a good idea: with a laugh, a "þetta reddast" and the implication that you are a humourless spoil sport that just doesn't understand the Icelandic way.

Until the inevitable hangover the next day. But like any good addict, while stumbling through the mess, trying to peace together what happened the only reaction you have to the piercing headache is that you really need to find the next party.
At least this is my explanation for what happened in the last elections.

A tourist themed party
Last year there has been a record number of almost a million tourists in Iceland with an annual growth of 20%. The whole population is only around 340.000. These tourists required infrastructure, such as hotel rooms and hiked through fragile countryside to visit tourist attractions where they required services, such as bathrooms and left behind lots of waste.
Here the externalities of the tourist industries became apparent. The already ridiculously limited rental market basically collapsed, with thousands of flats taken out of it and changed to AirBnB.
Landowners watched as thousands of tourists trampled over their land to visit geysirs and waterfalls, destroying the vegetation and leaving waste behind for a lack of toilets. In the end some decided to charge entry fees. However the right to travel freely over other peoples land has been protected by law since the 13th century and the entry fees were deemed illegal. But the incident started a discussion on how to pay for the externalities of the tourist industry.

Financing the clean up
Two ideas were thrown around: increase the tax on hotel accommodation and other tourist industries or implement a "nature pass" akin to the National Park Pass in the US. The first would be relatively easy to implement and only affect tourists or tourist related industries. It would mean higher airfares and hotel prices, thus the number of tourists might decrease, yet they would spend more money. The second idea does not only go against the before mentioned Icelandic law of free travel, but it would be a bureaucratic nightmare to implement, considering the vastness of the Icelandic highlands. On a side note: I wonder if the farmers who go to father the sheep in the highlands in autumn will have to buy the nature pass to do so.
Here one can also see an ideological problem, nature as a communal resource or private property. Maybe it is not surprising that the proposal comes from a government traditionally representing landowners. Maybe the close ties of the government with airlines and hotel owners come into play as well. Maybe it is just a natural reflex from a neo-liberal government to try and avoid raising taxes against all reason.
It should be noted as well that a fee, such as a nature pass is regressive, while a tax, especially on luxury goods is progressive.

Tourists are cash cows
With almost a million coming to Iceland there has been a change in attitude towards tourists. From visitors they have been reduced to cashcows, herded through tours and tourist shops, with ridiculous articles such as below: 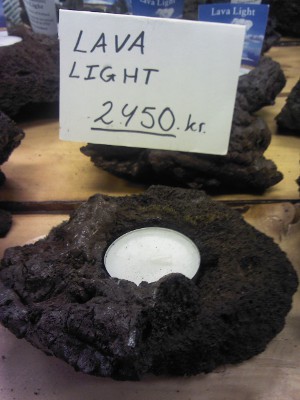 The key chain costs almost 10€. Lava is not a limited resource in Iceland, Holahraun, the fissure which has been erupting for the past 4 months has already produced a lava field of 81m². Enough lava candle holders for whole generations of tourists.