This album wins worst title. Also we have to talk about REM selling out again, not because of the album, but because of the record deal following it and the departure of the best member of the band.

With New Adventures in HiFi the 5 album record deal with Warner Bros ran out and they negotiated a ridiculous lucrative new record deal of a rumoured 80 million dollars with Warner Bros. REM had long ceased to be the small band from a small town in Georgia that could and had become an institution over the last 5 years . Music snobs (some music journalists included) resented that "their" cool secret cult band were internationally successful stars now. Pricey concert tickets during the Monster tour were held against them (fair) as well as playing stadiums after having said in the 80s that they dislike the idea of playing in front of an audience of more than 5000. It also did not help that they had stopped inviting music journalists to hang out with them in Athens (2 of the 4 members had moved away) and that they parted ways with their long term manager and college friend Jefferson Holt (most probably because he was harassing an employee, but I guess REM were expected to follow bro-code here? Instead they removed him, changed the lyrics of the song where he was mentioned and never spoke of him again). Claims from REM that they have maintained their creative freedom with the new contract were outright rejected, Up would very much prove them right there, but the whole discussion eclipsed New Adventures in HiFi.

One year after New Adventure in HiFi was released Bill Berry left the band to be a farmer. First of all, how cool is Bill Berry? He got offered a multi million dollar contract and went "Nah, I'd rather be farmer instead". Hands down the coolest member (the correct order is Bill Berry, Peter Buck, Michael Stipe, Mike Mills. Fight me). The others decided to continue. For years REM had maintained that each member is essential (reflected by sharing song writing credits) and that the band would cease to exist if any member left. For the "REM is selling out" crowd, continuing after Bill Berry left was just another example of them abandoning their principals. The departure was amicable. Berry wanted to leave, because he did not like being a rock star anymore, he hated travelling, hated giving interviews and (as he said recently) did not actually like playing drums that much. He also did not want to be the reason his friends had to give up something they love. They continued with his blessing, he returned once, when they were inducted in the Rock and Roll Hall of Fame and otherwise plays with Buck and Mills in some of their side projects every now and then. Whether they should have broken up or not, his departure was the end of an era and for many New Adventures in HiFi was the last great REM album.

New Adventures in HiFi
The album is great. Most of it was recorded during the Monster tour and it has a lot of energy because of it. It is more of a rock album than Monster was, which had in a way only two fast tempo rock songs (What's the Frequency Kenneth? and Star 69), New Adventures in HiFi has 5 (The Wake-Up Bomb, Leave, Departure, Binky the Doormat and So Fast, So Numb). Instead of overloading his guitar with effects Buck combines the rockier guitar sound with his melodic playing style. He also is exploring some more playing styles, with a more impressionistic style on Undertow and the e-bow on E-Bow the Letter. The more melodic, folkier sound from Automatic for the People is back as well, on songs like Electrolite. The mixing is back to the clean production sound that started with Lifes Rich Pageant. Which is really good, as they are all really on the top of their game, with something musically interesting going on in each part, be it an interesting bass line or guitar riff, piano part or lyric. 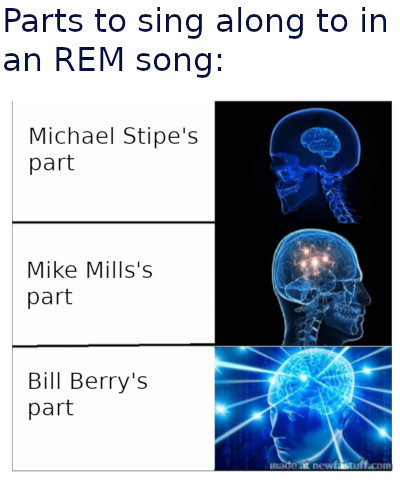 Closing thoughts: There are two kind of REM records, the more concept records, with a thought out musical style, like Automatic for the People or Monster and the once like this one, where they have lot of different musical ideas in one album. Sometimes it creates a whiplash effect, like Green, here it really made a very varied and interesting album. I somehow never connected to it as much as I have with other albums, but I understand why fans rank it very high. If you like REM, this is a good album to have. Next is the first album without Bill Berry, the very inaccurately named "Up".