For the rest of my days in Colombia I slowly travelled south, stopping in more or less random places and spent some time hiking or cycling around.
I saw a beautiful small town (Villa de Leyva), 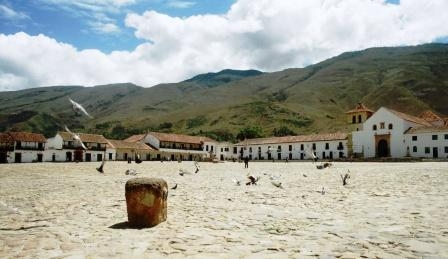 where people from Bogota hang out at weekends, and which does not only have an Oestrich farm nearby, 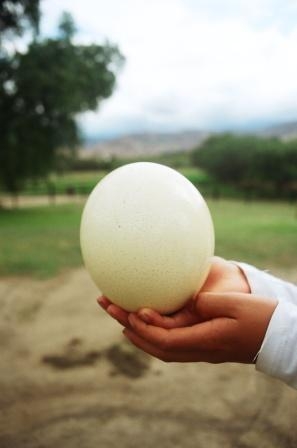 but also has an awesome Café, one of the only places which understands that coffee with milk is not the same as milk with coffee and that coffee should always come with cake :)

The other town I went to could not have been different, there were horses grazing on the townsquare

and I stayed in the only hotel/resaurant in town. Buying cheese ment knocking on random houses, asking if they are selling it. I hiked a bit around and looked at ancient tooms

in the beautiful area around St. Augustin 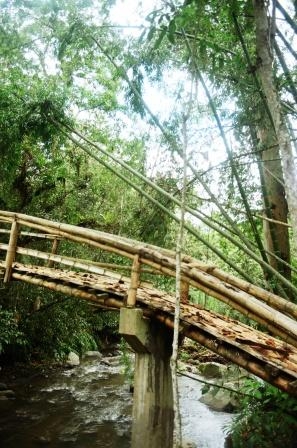 Going further south, stopping in random towns on the way, I saw a lot of the everyday Colombia. It is a surprisingly (considering its reputation) easy country to travel through. Pictures can be found here.

I decided to be all adventurous for a few days and take part in some extreme sports. Caving and Paragliding.

Caving was a lot of fun, I had wanted to do this for a long time. We did not need climbing gear (unfortunately, but it is always good to have more plans for the future) but crawled around in tiny tunnels, waded in water and dived from one chamber to the next. Adventure!

Someone should have told me however, that Paragliding is a lot like being on a roller coaster. I get motion sick easily, fortunately for the people below me I managed to keep my lunch to myself, but had to lie on my back and breath slowly for a while after we landed. Never again.

Some pictures of the area I took after I recovered:

Mompos is cool, if there are vampires in Colombia here is where they live. In the whitewashed houses and cobblestone streets. Dead bugs are everywhere and bats fly around town at night. On the cemetery live a bunch of black cats 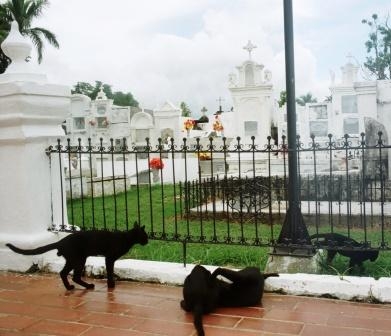 and the town is empty during the hot day, but the in the night the locals sit in rocking chairs in front of their houses or in the courtyards with the door open to the street.

Probably waiting for an unsuspecting tourist to pass by...

Comments: »
unsuspecting   Posted on 28 Oct 2012, 3:39 by me
unsuspecting, not unassuming of course. I should not write blog entries after long bus rides...

The way to Buchamaranga is described by the Lonely Planet as the best journey in Colombia, an "exciting" two day journey, with a stop over in the river town of Mompos.
If you read "scary" as "exciting" it might have a point.
The journey included going down a river on a small Lancha in the dark and bumping into logs while lightning lit up the sky. I don't know if the man next to me praying or the fact that they actually provided life vests worried me more.
Glad to be on land again I changed to the back of a motorbike (my backpack was resting on the tank). We drove at breakneck speed over country roads dotted with potholes with the headlight threatening to go off every minute or so. The much to big helmet I had been given was sliding around on my head.
I forgave everyone who had ever wronged me, promised to appreciate all the good things in the world and be in general a much nicer and better person, just let me survive this universe!
But no worries, I'm already back to my normal horrible self again.

My sailing trip ended in Cartagena, said to be one of the most beautiful and romantic cities in South America.

It was an awesome place to start my South American adventures with, and I could not stop myself from taking lots of pictures.