I'm hiking in the rain 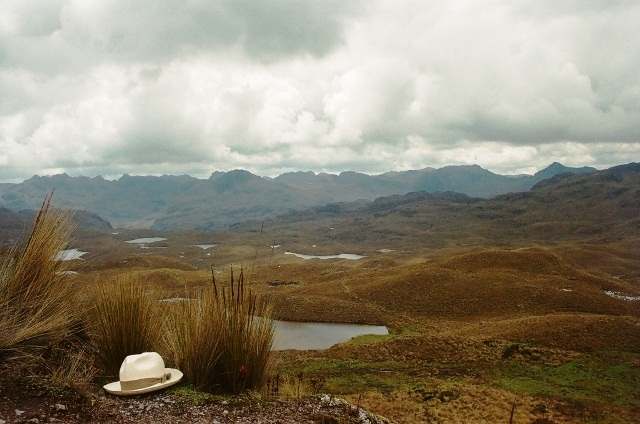 Before hiking the 5 day inka trail in Peru I wanted to test how the altitude is treating me and went to the Cajas National Park near Cuenca on a two day hike.

I did not go alone, but with two German guys and a Frenchman, who wanted to fish or trout in the countless lakes.

I had met them ,as well as a girl from the Netherlands, on the bus to Cuenca and we had walked to town together. The centre was pretty much closed down for traffic as a festival was going on. For the same reason we ended up sleeping in the unfinished rooms in the attic of a very friendly hostel (Hogar Cuencano), because there was no (other) room for us in the inn.

The dutch girl did not feel like hiking, but when I came back she was still in the hostel, which was nice. Hanging out with these four people was very relaxing and natural anyway, there is something like a European mindset, maybe something to remember as all the discussions about Europe these days are focusing only on money.

In the Park there is also an inka trail as the empire did extend all the way from Peru to Ecuador, so in a way I was already on the way to Machu Picchu. 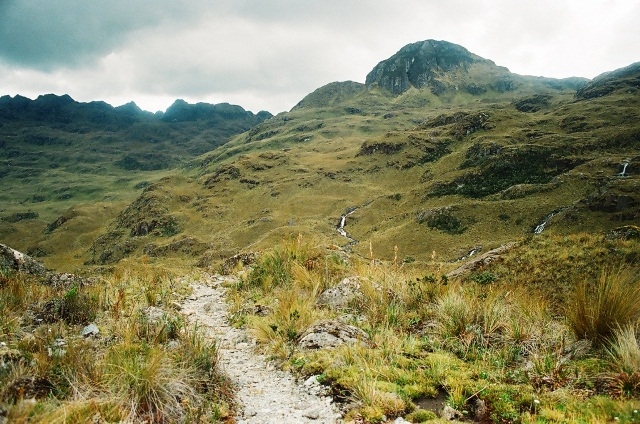 The first day me, the Germans and the French guy hiked together, ridiculously out of breath after every little hill because of the altitude, but with no other problems. We arrived on the big lake where we wanted to camp early afternoon and the Germans started fishing. And then in started to rain and it rained and rained and rained...

At some point I went to bed, to be awoken at 5 am as the French guy wanted to catch a bus in the afternoon, but it was still raining and dark outside, so I decided to spend a few more hours in my sleeping bed. I got up and packed up in the short time it wasn't raining, but after one hour of hiking it started again. And did not stop.

The trail transformed into a mudpit or a stream, forcing me to jump from slippery stone to slippery stone. I had thought the second day would be easier, as my map indicated it was going downhill all the way, but it was a steep and tricky climb.

I have never been that miserably wet during hiking, and most of the hiking I did in my life was in Iceland! The only highlight of the hike was passing two Alpakas, who were staring at me relaxed and warm in their thick fur and I swear I heard them snicker at me behind my back. I was glad when I reached the end of the trail and could walk on a road towards the highway, at least I was not wading through mud anymore!

I had learned the value of gaiters and my rescue sheet during the hike, thanks to by brother Stefan and my sister Andrea for the advice!

When I was walking to the highway a local Rancher saw me and as he was on the way to Cuenca anyway offered to give me a lift, not before giving me some hot tea and cookies. His house was built into and around the rocks on his ranch, so some of the walls were rock, which looked really cool.

Back in Cuenca I had a very long hot shower. I hope it will not rain that much in Peru.

A stand up comedian in Cuenca

A day at the beach

I went to the beach near Puerto Lopez to hike around a bit and take pictures...

It is a beautiful place, I did not in any way enhance the colours in the pictures.

I went by tuk tuk (the badass version with a motorbike, not a scooter) and got to drive my first motorbike until the driver started to feel anxious...
At the beach he accompanied me for a bit and I got an idea of the misconceptions about Europeans in general and Germans in particular that exist in Ecuador. Some more entries for my book of generalisations! Or maybe he was pulling my leg by asking strange questions.
On the way back to town this happened:

But it had nothing to do with me driving it before, it was simply a flat tire.

I did not go to the Galapagos Islands, I had failed to rob a bank on my way to Ecuador and am running out of rich relatives as well. Instead I went to the alternative for poor people like me, an island of non-volcanic origin, but with similar wild life.

So here they are, the famous blue-footed boobies (I double checked the name, for obvious reasons :) being in love:

and the result of that love: As I had to join a tour to make it to the island (swimming was not an option) I ended up spending the day with adventist missionaries. I was smart enough to avoid the topic of religion, though (or to be honest about my view on organised religion or missionary activities in general) and got rewarded with a nice dinner as they were really friendly people.

I lost my hat a long time ago and never really felt like buying a new one, but from Panama on was haunted by the Panama hat. Contrary to the name the hat is traditionally from Ecuador and the art of making them is dying out, thanks to cheap Chinese copies made out of paper instead of palm leaves. So I ventured to the old town of Montecristi a real Panama hat is waterproof (to an extend of course, not a whole day of pouring rain) and can be rolled up for storage, two requirements I have of a hat. Plus they look cool!

I wonder what the door did.... A friend asked me to write an entry in German, so any non German speaker, there is a summary at the end of the post. Or learn German...

Basically (and I´m too lazy to write everything again in English) I arrived in Quito by bus, was lost in terms of where I was and where I had to go to, spend a day walking around, not being overly impressed by Quito and was not converted to Hare Krishnarism.

Jasmin is hopefully taking over my blog for one or two entries, as she has a lot of Ecuador and Colombia advice, as she spend half a year living in Ecuador.