No comments
When I was in university in Amsterdam my brother gave me "Fool on the Hill" from Matt Ruff as a birthday present. I loved the world building and characters (Blackjack the cat!) in this book even though the plot kind of falls apart in the end.
Ever since then I wanted to visit Ithaca / Cornell University. This summer, needing to travel from Sandusky, Ohio to Baltimore, Maryland I decided to plan my route over the Niagra Falls and Ithaca. 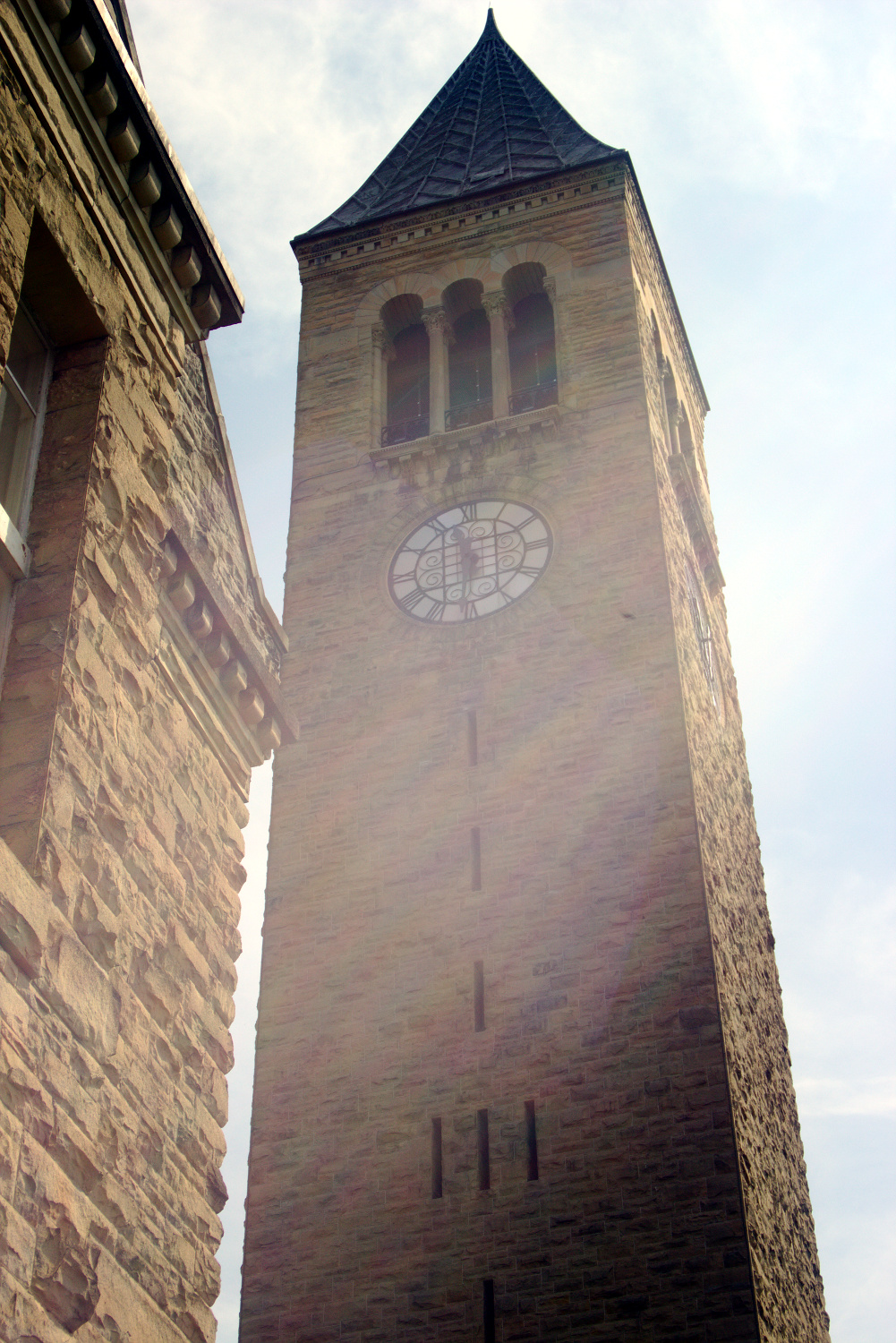 Arts Quat, where ST George (really) flies his kite and fights a dragon (with a kite, which is even better in German as kite and dragon are both "Drache") 1 Comment
This year my birthday was on Karneval again. So obviously I insisted on a German style Karnevalsparty. I even sowed my own mouse costume (by hand!). One of my friends (who shall not be named) is creatively verbose (insert joke about Americans here) and I asked him to hold a Büttenrede* for me. Which he did, rhymes and all:

Here we are together,
Hiding inside from this awful weather.
We're here to celebrate the start of Carnival,
Drinking, eating, dancing, and all.
But we have also gathered for a second purpose, one which our host holds most dear:
We are celebrating the day that my nemesis has lived yet another year!

Even though she is hiding behind a mask,
I can tell which one she is; I need not ask.
She is that little mouse,
The one you've seen scurrying about the house.
Drink in hand, she's been having a great time,
And hopefully I'll make it even better with this little rhyme.

Today is her 35th birthday, a milestone in anyone's life.
Usually this is the time for a crisis, so please make sure we don't let her have a knife.
But even if she doesn't go psychotic with a kitchen utensil,
After today, she still might be a bit mental.

Some people learn an instrument, or switch religions, or buy a new car,
Personally I think our favorite German won't go that far.
She seems happy baking bread day in and day out.
With this extremely repetitive and simple life,
I truly wonder if she has more cognition than a trout.

After all, why would you ask someone like me to write a speech about you?
Clearly, we have seen that idea is absolutely cuckoo.
She might have thought, "nothing can go wrong!" and "he will be such a nice friend."
I thought "I totally have to abuse this, all the way to the end."

I have some interesting facts about Christina,
Ones you might not have heard before.
She tries to guard them, like secret lore,
But fear not, for now to you all I lay them before:

She comes from the state of North Rhine-Westfallen,
A place where you probably wouldn't go unless you got lost in.
First, some information about this bundesland:
This place is the smelliest in all der Länder,
That's why we gave them Köln, in all its splendor.
Of course, in English, this city is known as Cologne,
All the stink is masked by this one place alone.

But Christina is not from Köln.
She comes from a town in the very west,
A place which likes to claim they are the very best!
They say they're famed for emperors and springs,
But smart Germans of course know they're actually famous
For other things:

Our favorite German comes from a family most grand,
A family, that in 1799, wanted to become famous throughout the land.
Though a long line of chicken farmers and beer drinkers,
The Milchers also fancied themselves great thinkers.
They decided that they would rename their town,
Such an action would obviously bring them great renown.

While farmers and beer drinkers do have a good idea now and then,
What kind of name would you REALLY expect from such a group of men?
For many days and nights they debated names: over and over, again and again.
Finally, one night, after seeing a lone chicken in its pen,
A drunken Milcher suggested, "Why don't we just call the place Aachen?"

Now, I don't have much left to say, except that without Christina,
My life would certainly be much more dull.
She is a good person, and whenever I am with her, there is a never a lull.
Of course, she is my nemesis, so I can't give too much of a good word,
So I will end this poem now before it gets even more absurd.

* Die Büttenrede is a traditional Carnival speech, which is held standing in a tub (die Bütte). It is usually used to poke fun at people in power (though these days it is used for self-promotion of prominent guests of the more established Carnival clubs). It rhymes, is full of puns and often held in local dialect. It originated from the tradition that one could get away with saying things during Carnival that in other times would have gotten one into trouble.

No comments
Karneval in Aachen is probably my favourite holiday. My friends here do not understand why, probably because their only experience with this holiday is me insisting to celebrate my birthday by forcing everyone to wear silly costumes. I love that Karneval is one of the few holidays with distinct local flavours (Brazilian Carnival, Mardi Gras, Venice Carnival, Fasching etc) a mix of folk and Catholic traditions. However, I find the Iceland version of Karneval pale in comparison to the one I know from Aachen a sad leftover from when Iceland was Catholic (until 1550).

Aachen - Fettdonnerstag (Weiberfastnacht, Fat Thursday)
In Aachen Karneval begins on Thursday at 11:11am. Traditionally this day was the day for women to take charge and throw all the "proper ways" for women to behave out of the window for one day. The only leftover from this origin is that women cut off the end of the neck ties of men (yes, not so subtle). These days it is the beginning of the street Karneval, everyone leaves work at 11:11am and goes out on the street to dance, watch perfomances and celebrate. I costume of course (yes we turn up to work in costumes and no this is not an actual official holiday, but custom to the point that banks for example close at 11:11am).

Iceland - nothing
and I always feel sad at 11:12am that day.

Aachen - the whole weekend after
Parties everywhere, crazy people in costumes everywhere and this:

I know it needs some more explanation. So the area around Aachen was taken over by Prussia after the Napoleon wars. Prussia was a very bureaucratic and militaristic state. The uniforms, voting for a "king of karneval", mock ceremonies political speeches (held standing in a bathtub and using rymes) were all pocking fun at the people in power. Unfortunately some of the biggest Karneval organisation now invite politicians and leaders of Germanys biggest businesses to give them a platform in their celebrations. This is what one sees in TV and it is dreadfully boring with a side of fremdschaemen at the obvious pandering and bad, bad humourless speeches. There are smaller organisations (or non-organisations as the Tropi Garde) which still is full of witty political commentary made by volunteers and no politicians or business tycoons are invited, but one has to find it.

Aachen - Rosenmontag (Rose Monday)
So I was under the impression that this is an official holiday until I started googeling (or rather using duckduckgo for searching) facts for this post. Public institutions are closed on this day, public transport is running on a holiday schedules. There are parades, which means the city is closed for traffic. The parades include candy being thrown into the crowd of onlookers. We used to come home with bags full of candy as kids.

Aachen - Dienstag
People are going back to work and/or slowly recovering from 4 days of partying. There are still some things going on, but it is winding down.


This is the day you eat salted meat and yellow peas for lunch until you burst. From 2009 to 2013 IKEA offered salted meat and yellow peas for 2ISK (less then 1 cent) to honour the tradition, especially as a response to difficult situation for many Icelanders after the economic crisis. People ate so much that they puked, so they changed it in 2014 to 995ISK and this year they are selling it for 495ISK, which is still cheap (4€).

Aachen - Aschermittwoch (Ash Wednesday)
As I mentioned above, Karneval has folk as well as Catholic roots. Ash Wednesday, the beginning of lent is when last years palm branches (from Palm Sunday before Easter) are burned and the Ash used to mark the forehead with a cross. For the purpose of Karneval we say

Am Aschermittwoch ist alles vorbei
Ash Wednesday everything is over


The party is over, lent starts and after almost a week of constant partying people feel inclined to fast.

Iceland
... is confused here. They call it Ash Wednesday (Öskudagur), but this is the day the kids dress up in costumes and go through town from shop to shop to ask for candy, basically mimicking Helloween (not the same as Carnival, people!)

No comments
Hello again! My many, many readers (ehem) probably wondered what happened to me the last few months. After I celebrated my 15 years of Stockholm syndrome I had a bit of an existential crisis and did not particularly feel like blogging. But just like the sun, I'm back bitches!

To all my English friends