No comments
Here is a map of all the craft breweries in Iceland, except the newest ones, Ladies Brewery and Bölgerðin. I remember the dark times before 2007, when the only beer you could get was watery lager. "Fortunately" Icelanders have been drinking more alcohol than ever in the past year, so it is likely that the craft brewery movement survived the drop in business with the lack of tourists coming into the country. 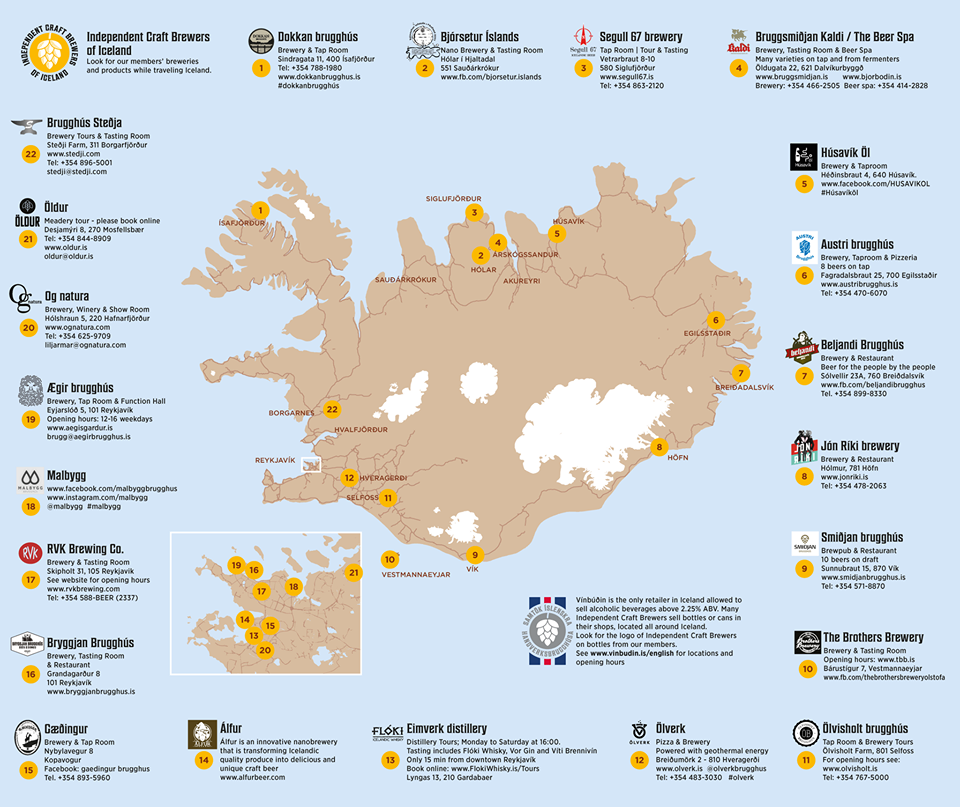 Christmas beer - the missing ones

No comments
I was not quick enough in buying Christmas beer and missed the Christmas beers of three breweries, Gæðingur, Einfalt and Bölgerðin.

Gæðingur is one of the older micro-breweries in Iceland it was founded in 2011 in Skagafjörður, close to Blöduós, where I lived for several years. Gæðingur is the Icelandic word for a good horse, Skagafjörður is famous for it's tradition in horse breeding. A lot of people own horses and while I was there, I learned how to ride a horse and witnessed Landsmót, the Icelandic horse festival. So if you ever go to Skagafjörður, visit Gæðingur brewery and ride some horses! (But do not ride drunk, though this is an Icelandic tradition.

From one of the places I used to live to another, Ölverk is located in Hveragerði, a 45 minute drive away from Reykjavík. They were founded in 2017 and are not only a brewery, but also a pizza place. When I lived in Hveragerði, the only pizza available was from a Dominos style pizza place, which traumatized me, by introducing me to the fact that the Icelandic version of 4 cheeses pizza has blue cheese on it. I have not been to Ölverk, but heard good things, so if you visit (it is worth it, there are good hiking trails through areas with hot springs around Hveragerði) or pass through and feel like pizza go and check them out.

The last one, Bölgerðin, was founded in 2020. They do not have a website yet, their beer is only available in the Icelandic State Alcohol stores as of now, as they prioritized getting their beer into stores over having it on tap in bars, because of covid. The website of the Icelandic State Alcohol store tells me they only have three beers out, additionally to their Christmas beer and TWO of them are a sour. Not off to a good start....

No comments
Another Brewery in Reykjavík and another one founded in the past five years (this one in 2017). They specialise in IPAs and Sours, and therefore should not be my friends. They collaborate with a bar I like though (because of their amazing jalapeño cheese dip pretzel), so they are forgiven. If your taste is different from mine (and wrong) you can check them out here.

Like Smiðjan they have 3 Christmas beers, which come in 0.5l cans, so beer tasting was again done in collaboration with random friends. Jeff features again with Jólakisi (the Christmas cat, not pictured), another IPA. He really liked it, I found it very drinkable, it was sparkely and refreshing. Not very fitting to the name, the Icelandic Christmas cat, is a monster, which eats childeren, who have not gotten new clothes for Christmas. Maybe I start to acquire a taste for IPAs.
One thing I will definitely never aquire a taste for are sours. Malbygg have one sour as a Christmas beer Djús Kristur, a kettlesour with mandarine and vanilla. The name is a pun on Jesús Kristus, Icelandic for Jesus Christ, djús means juice. I tried this and the following beer with Friggi. We were trying to write bylaws for a workers' coop and decided it will go better with beer (it didn' t). We both were not impressed. It tastes like a sour version of a really flat, cheap orange lemonade. Or maybe an orange juice made from concentrate with too much water used.
We quickly moved on to the next beer, Hnetubrjótur, a hazelnut milkstout. This beer is like drinking liquified chocolate nut brownies. It is nice, to drink after dinner as some sort of dessert, I would not have it all the time, though. It does work very well as a Christmas beer and is not an IPA or a sour, so points for that.

I really would like to go and have a beer and pretzel with jalapeño cheese dip now, is the plaque over yet? Goals for 2021, I guess.

No comments
Smiðjan Brugghús was founded in 2018 in Vík as a brewery and pub. The booming tourist industry was not the only reason so many breweries were founded in Iceland in the past 8 years, the government also had several grants one could apply for to found a business in the tourist sector. It is somewhat of an Icelandic tradition to always be creating gold rushes. Before the collapse in 2008 it was the financial sector, in the past 8 years it was tourism. Sustainable growth of any industry is just not an Icelandic thing. It is one of the reasons Covid had an immediate devastating impact on the Icelandic economy and the poster child of the bubble and the the aftermath of it bursting is Vík, which is the main tourist hub on the south coast. Smiðjan (as most of the other micro-breweries I have covered) seems to be surviving for now and you can still visit their bar if you make it to Vík.

They have three Christmas beers and one of the reason I am covering them late, is because they only come in 500ml cans, and this is too much to drink on my own, so the following opinions are by me and two friends. Santa's blue balls, a milkshake IPA with vanilla and bilberries and Choc Ho Ho, a milk stout with chocolate and peanut butter were featured at Christmas dinner with Mariska and Jeff, who have appeared on this blog before. Jeff was willing to share (my) beer with me, we did have some fights how to interpret me just wanting to try a little of it, for me this means half a glass, for him it means just a sip. Jeff likes IPAs and he liked Santa's blue balls (hehehe). We both had been disappointed by All That Glitters Ain't Gold Raspberry Ale from Lady Brewery for lack of fruitiness, but with Santa's blue balls, Jeff was happy that the bilberry beer tasted of bilberries. I only tasted hops. Choc Ho Ho tastes like liquid peanut butter, it is strange.
Ris a la Sour, the last Christmas beer from Smiðjan, is a sour and I was lucky that a friend of mine, who does not like beer at all, but likes sours came by my place. They loved it and were excited to drink most of it for me, so I only had to have a few sips to try. It does not taste like beer at all, it is not as terribly sour as the one from RKV Brewing company, but it is still a sour.

No comments
There is not much to say about RKV Brewing Company. They have been around since 2018, are based in Reykjavik (bar included) and are founded by some banker, who left the financial market to brew beer. They have 4 Christmas beers, and one of them, to my horror is a sour. I always thought IPAs were the worst beer and I could not wait for them to go out of fashion (there was a time 90% of beer you could get here were IPA or way to hoppy lagers) and for the next trend to start. Then the next trend were sours, the beer for people who hate beer. Seriously, the only person I know who likes sours does not like beer. Things I do for science. 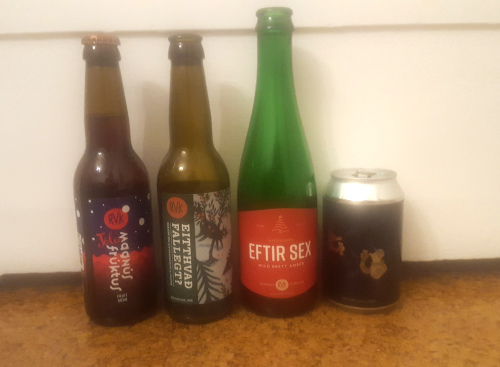 The four Christmas beers they have are:
Frostrósir, a traditional white ale and my favourite. I noticed during the weeks of beer tasting that I prefer the beers with no or few added ingredients. This beer manages to be light and fruity and still feel like a winter beer. It tastes like a crisp winter morning. There, this is my poetic line of the day.
Eftir Sex a wild amber. Brewed with wild yeast and slightly sour as these kind of beers are (not a sour though!) this is not as much to my taste as Frostrósir, but it feels like the pinot noir of beer, complicated and maybe not for every day, but if you are in the mood for it amazing.
Eitthvað Fallegt? a season IPA with mandarins and Christmas tree(?????). The sweet mandarins balance out the bitter IPA taste nicely, I do not know how Christmas tree tastes (it is pine they added) and I did not taste it. I guess considering some tendencies of Icelandic brewers (looking at you Steðji) I should be thankful for any beer ingredients, which do not include bones or testicles. Throw a tree into your beer, why not?
Jóla Magnús frúktus we ave arrived at the sour. This one is using skyr (an Icelandic yogurt, which is actually cheese, full of protein, so quite healthy and usually yummy) for the milk acid part of the beer. The fruit parts of the beer (billberries and cherries) do not even out the extreme sourness of this beer. It tastes like fruit skyr that has gone sour.

Sours are an abomination.