After finishing testing and not being too impressed by the Christmas beer of the three biggest breweries in Iceland (Víking, Gull and Egils) it was time to move on to Microbreweries. This time we tested beer from two Microbreweries from the north of Iceland, Jólakaldi from Bruggsmiðjan in Árskógssandur in Eyjafjörður and Gæðingur Jólabjór from Skagafjörður. They are both pretty small and were founded recently, Gæðingur founded in 2011, has 6 fermentation tanks and Bruggsmiðjan, founded in 2005, produces around 300.000l of beer per year (one liter for each Icelander ).

Jólakaldi
Kaldi beer is generally brewed after Czech tradition and for their Christmas beer they used 3 different kinds of Czech malted barley. It is a red ale with 5.4% alcohol.
Christmassiness: Thanks to the malted barley it has a slight creamy taste of caramel. This is how I imaging Butterbeer from Harry Potter tastes like.
Overall tastiness: The sweetness of the caramel is balanced nicely by the slight bitter taste of the red ale. It is very smooth. You can taste that someone put thought and experience into this beer. This is a really really yummy beer.

Gæðingur Jólabjór
This is a pale ale (4.6%) with malted barley. It is very hoppy and though it does not say Indian Pale Ale on the bottle, to me this is what it tastes like.
Christmassiness: It tastes like Indian Pale Ale, which neither I nor anyone else in our group associated with Christmas.
Tastiness: Grazing through a hops field. I don't like Indian Pale Ales. Fortunately this is were my co-tasters jumped in. They pointed out that, though it is a light beer, it has a very full taste and there is no bitter after-taste. It is definitely well made in terms how the tastes balance each other, similar to the Kaldi beer above.

Overall, we decided that during this tasting we got to appreciate the art Icelandic Microbreweries put in their beer. Both were really good beer in their categories, but everyone agreed Jólakaldi was tastier and actually tasted like we imagined a Christmas beer.

Yesterday (Friday) we all get together for a dinner in our little family. While we ate delicious vegan food we shared a bottle of Gull Christmas beer.
It is a stronger lager (5.4%) with added orange peels. One thing I noticed positively about Icelandic Christmas beer is that except for the one from Egils, they all use non-artificial flavours.
The beer smells citrousy and one can taste a hint of orange.
Christmassiness: Orange is a Christmas taste and as it helps that it is a bit darker
Tastiness: It does taste strongly like a Gull Lager beer, which I do not really like (I do not like lager beer in general) and even objectively is not a very nice beer.

After some consideration this is our rating so far:

Egils Malt Jólabjór
There is an Icelandic tradition to drink non-alcoholic malt beer mixed with orange lemonade over the holidays. This is the alcoholic version of the malt beer. It has sugar and licorice inside.
Christmassiness: On a cultural level, this is very much a Christmas taste. It is also very lazy, taking a drink which is already associated with Christmas and adding alcohol.
Overall tastiness: Like the original you would have to mix it with something to make the sticky sweetness of it bearable.

Víking Jólabjór
The special ingredient here is caramelized barley. It smells like beer. It tastes like red ale.
Christmassiness: It tastes like normal red ale, it might as well be a summer beer.
Overall tastiness: It is a solid red ale, I like red ales, so I liked this.

The winner:
Víking Jólabjór, because it is the one which actually tastes ok.

No comments
Over the past few years Iceland has developed quite a beer culture. Microbreweries popped up all over the place, almost every bar has at least one craft beer on sale and I know several people who are experimenting with brewing beer non commercially. Around Christmas most of the breweries have a limited Christmas beer and after a trip to the alcohol store I came back with 11 beers, one of each (the Thule Christmas beer is missing, because I tried it in a bar, but did not like it.). 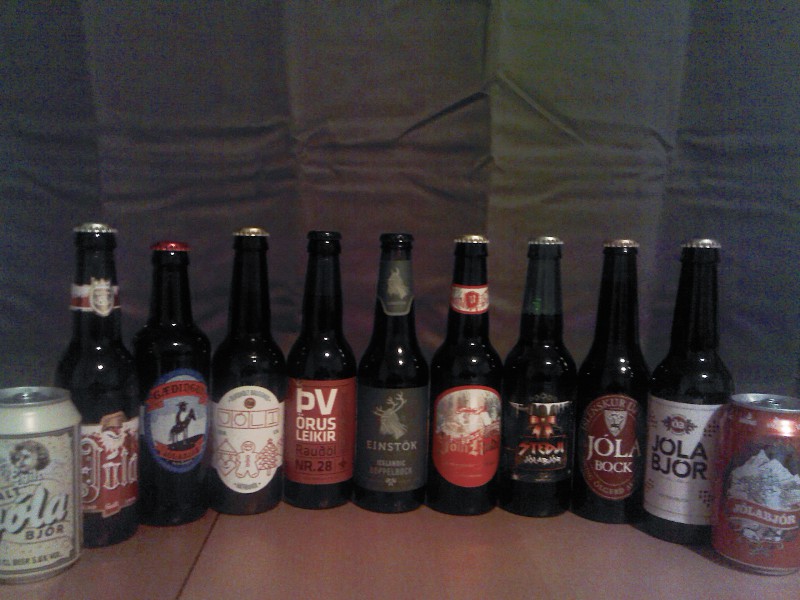 In the following days I will test them all with whoever feels like having a beer with me and rate them according to christmassiness (how much they remind me of Christmas) and overall tastiness and by the end have a list from 1 to 11.