No comments
The administrators of Expat-Blog asked in the Forum to write some information about the Icelandic Health Care system. Considering I'm working in it, I decided to answer.

The health care system in Iceland is a NHS style system, which means everyone is covered by the Icelandic Health Insurance, which is financed via taxes.
There is no private system to speak of, but the current government is working hard on changing that, crippling the public health care system while a private hospital is planned to be built.

Immigrants who have been legally residing in Iceland for 6 month are automatically covered. If one is from an EEA country can get coverage via the European Health Insurance Card or is insured directly if one has been insuread/resided in one of the EEA member states 6 month previously. One has to request form E104 (or form E106/E109/E121) from their previous insurance provider and submit it to the Icelandic Health Insurance.
For none Europeans see here.

Dental care is not covered by the Icelandic Health Insurance.

This is where the trade unions come in. Almost everyone (85%) who is employed is in a union. They play an important part in the social security system, offering financial support for holiday, education and healthcare. Unions will often refund part or all of the out of pocket payments for medication, dental care or therapies. They also have sick day funds for after sick pay rights expire (even for sick spouses or kids!) and disability funds.
See the these two links as an example: http://vr.is/english/sick-payfund/ http://vr.is/english/grants/
One can find out which union you belong to by checking your working contract or your payslip (union dues are taken automatically from the wages)

No comments
This was actually my first May Day parade ever. Where I was from in Germany we were too busy trying to catch boyfriends or admirers setting up birch trees in front of our house and pouring water over them. Really, this is a thing: http://www.dw.de/in-germany-say-i-love-you-with-a-birch/a-16772753

Yes, not very revolutionary, but am making up for it now...

Walking in the parade: 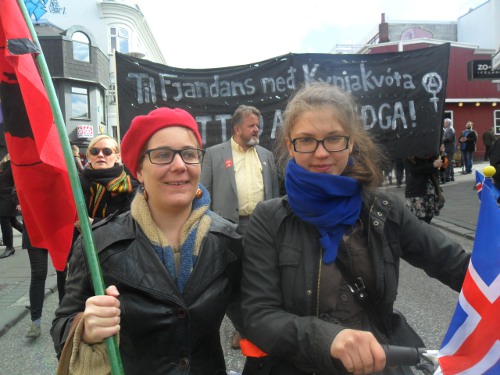 IWW members rousing the rabble (and waving red flags with the black cat on it):

No comments
I got a reply from the Adidas Group concerning the situation in the Yue Yuen factory. It is a hilarious letter, some excerpts are below

We were closely monitoring the situation at the production site from the beginning. In order to minimise the impact on our operations, we reallocated some of the future orders originally allocated to Yue Yuen Dongguan to other suppliers. But we never intended to pull out of the Yue Yuen factory in Dongguan and we have no plans to do so.

And here is why we need an international labour movement, if companies can minimise the impact of a strike, what leverage do workers have to negotiate?

It is our understanding that the insurance contributions which YY had been providing, together with corresponding deductions from the workers, were in accordance with an agreement which they had reached with the Dongguan authorities and the local social insurance bureau.

Yay! The strike ended last week, additional to the contribution in the insurance funds, workers also got a pay raise and other benefits.

No comments
Last week I became an official member of the IWW, red card and everything. Which is fitting because I really wanted to write about the workers' strike in China.

Since almost two weeks 50.000 workers of the shoe factory Yue-Yuen in Donguan, Guangdong have been on strike. They are fighting for the legally guaranteed employers contributions to social (health, retirement, housing funds) insurance funds.

The employer is required to contribute to these funds according to the Labor Contract Law, which was adopted by Standing Committee by the 10th National Congress in 2007. A copy of the law can be found here.

As a reaction to the law most of the biggest sport shoe companies announced that they are looking for alternative production sites, claiming production costs would rise too much, if they had to adhere to the law.

In reality the law has been mostly a paper tiger. The law is seldom enforced not only because of the widespread corruption.
The whole political/economic system is geared towards economic growth. GDP is the major outcome measure used for evaluation on local as well as national level. In the last two five year plans (11th: 2006-2011, 12th: 2011-2016) the main target was to grow the GDP by 7/8% .

These are also the criteria used by the CCP to evaluate the performance of local governments. These evaluations also concentrate on short time spans, half a year to a year, which means local governments main goals are rapid growth, rather than long term sustainable development and instead of cooperating they are pitched against one another.

Donguan is positioned right next the towns of Guangzhou and Shenzhen and is part of the Perl River Delta, one of the main hubs of China's industry based economic growth.It has experienced an immense population growth in the last ten years, due to the influx of migrant workers, in 2008 only every 5th resident did not have a migration background and population has grown from around 2 to 8 million in this time.

This demographic development requires an immense amount of infrastructure to be build, such as living space, which would not immediately show a big return as far as economic growth measured in GDP is concerned. Furthermore local governments become interested in production values of companies settling there.

Therefore, despite what the central committee decides in the five year plan (The 11th included the labour contract law, while the 12th had a whole section devoted to the issue of migrant workers.) local governments are more inclined to cater to the need of cooperations than the workers.

Workers are systematically misinformed about their rights. Independent workers rights organisations are... discouraged. Yet, in the last 7 years awareness among workers about their rights has increased and they have been fighting more and more for them, culminating in the strike of more then ten thousand workers.

A few days ago I read in "der Spiegel" that the Adidas Group (Adidas, Reebok, TaylorMade and Rockport) is pulling contracts from the shoe factory because of the strike. It does however keep the business relationship with the supplier company "Pou Chen Group" intact, showing a blatant disregard towards workers rights and local laws. I encourage people to write to them and ask them to adhere to local labour laws and regulations and to draw consequences if their suppliers don't.

More info about the strike: http://www.labornotes.org/2014/04/48000-chinese-strikers-say-adidas-nike-timberland-you-fix-it