No comments
In German it is possible to easily make up new words, thanks to our affinity for compound words. Every year new words are created this way, expressing the public consciousness. Since 1971 the Society of the German Language has chosen a word of the year, celebrating our linguistic creativity. But if you can create new words to express developments in society, you can also express it's ugly side. Entering the Unwort (anti-word or un-word). Since 1991 a committee of linguist chose the Unwort des Jahres. Going over the list of these words can make you lose faith in humanity. There is

Picture of the week - Coud Forest

No comments
Forest hidden in the clouds on Emei Mountain in Sichuan. This is the last picture from my stay in China in 2018 and also one of my favourites.

Morgunblaðið is mocking me!

No comments
There have been hundreds of earthquakes in the last week. While most were, as usual for Iceland, under 3 on the Richter scale and not noticeable, we had enough big ones to feel the earth shaking several times a day. After a day or two, this had become common place and everyone stopped worrying about it. Except for me. Because I had to go to the dentist for a filling this week. I am already terrified of the dentist, the idea that an earthquake will hit while he is drilling into my teeth is a nightmare scenario. I guess someone told Morgunblaðið (Icelandic newspaper), because their cartoonist drew this:

It went well, or at least only was traumatizing the usual amount, without added earthquakes. The earthquakes is probably a sign of an impending volcanic eruption, something I am excited about, because I could see it from my living room window. Fingers crossed.

No comments
It has been 3 months since I wrote the post about Around The Sun. Partly because the Christmas beers took over the blog, but also because the album decreased my enthusiasm a bit. I was not eager to go on to Accelerate. I liked it when I first listened to it. I was at work alone in April, listening to all the REM albums to keep me from going crazy and after Around the Sun was just happy to hear jangly guitars, melodic bass lines and vocal harmonies again. Accelerate is REM retracing their steps musically, which makes my opinion of it change daily.

After Around The Sun, REM knew they were in trouble. They had let themselves be distracted by touring, releasing a best off and side projects. Most of the writing and recording of Around The Sun had been done by each member individually, without much communication between them. They knew they needed to refocus. They met up to write the songs together and recorded most of them together in an old chapel (now performance space) in Athens. REM playing in an old church in Athens, just like old times. It fits with the decision to return to their trademark sound, focusing on the kind of music they are comfortable with and use their energy into making it good.

Accelerate
Until Accelerate REM never made the same album twice. Every album was either developing the sound from previous albums further or a complete departure. For the first time, REM are looking backwards, drawing from some of the most recognizable elements of their music from the past 27 years. Music wise the album is closely related to New Adventures in HiFi, except when it comes to mixing / production. Both albums have the spirit of live recordings, but while New Adventures, which was recorded live on tour, has the typical clear and multilayered sound of Scott Litt, Accelerate was mixed and produced by Jackknife Lee, who went for a more compressed sound, equivalent to the sound of a live performance.
The desperate attempt to sound new in Around the Sun had caused them to add random elements to songs (looking at you electronic randomness in Final Straw). Not trying to redefine the sound of REM they focused their creative energies on writing good guitar / bass / vocal parts.
It is a very guitar heavy album, and Buck sounds so happy to just be able to go all out on guitar. Whether it is his usual jangle on most songs, folk inspired acoustic guitar on Houston and Until the Day is Done (which reminds me of Automatic for the People) or solo guitar, he seems to have so much fun. One of the best decisions they made on this album was to take the piano away from Mike Mills and hand him a bass and a microphone. How I missed both his melodic bass and vocal harmonies. The Album starts with a really cool bass riff at Living Well is the Best Revenge and just keeps going from there. I love the background vocals on the album. There are the usual counter melody vocal again, but also some more creative touches, such as the high harmonies Sing for Submarine or the "wohoos" on I'm Gonna DJ. Stipes singing performance is reminiscent of his more punk influenced singing style from the 80s, reminding me of his vocal performance on Just A Touch from Lifes Rich Pageant. Bill Rieflin is the drummer on this album and is very much earning his paycheck with most songs being very fast paced. He is not trying to copy Bill Berry and this album made me realize how distinct and different from traditional rock drums Bill Berry's style is.

I have a moment of brilliance
I know that I am not qualified at all to write about music and am frequently getting distracted by hairstyles and glittery suits, but I had my moment of brilliance on this album. When I listened to Houston I heard a familiar melody. The guitar part of the verses in Accelerate sounded really similar like the guitar part of the intro of Try not to Breathe from Automatic for the People. They are also both mid tempo songs with a folky fingerstyle guitar. It bugged me and I read several reviews of Accelerate, seeing if someone had heard the same. None mentioned it. So I decided to do some more research and looked up the chord progression for each song. Behold! I was right. The chord progression in Try not to Breathe is D, am, C, G, Dsus4, am; Houston's chord progression is D5, am7, C, G, D5 am(7). The main similarity is a small riff back to the D(5). It is more a reference than a copy, but it is there and makes me wonder if it was intentional.


Closing thoughts:
I had been excited about the new direction they went with, with Up, was sorry this journey ended with Around the Sun and can't help feeling Accelerate is a little bit of a creative capitulation. If this album had come out in the 90s, I would have loved it. If some young, new band had come out with it, I might have bitched a bit about copying REM, but would have loved it. This album was the last they toured on (a great album to play live). Collapse Into Now is their last album, they released it in spring 2011 and split in autumn. I can't help feeling a bit sad listening to it, but at least I will get to bitch about hair styles again.

Picture of the week - Lockets on Emei mountain

No comments
Lockets on the Emei Mountain in Sichuan province in China. Usually I do not like pictures taken with my mobile phone, but this one turned out well. 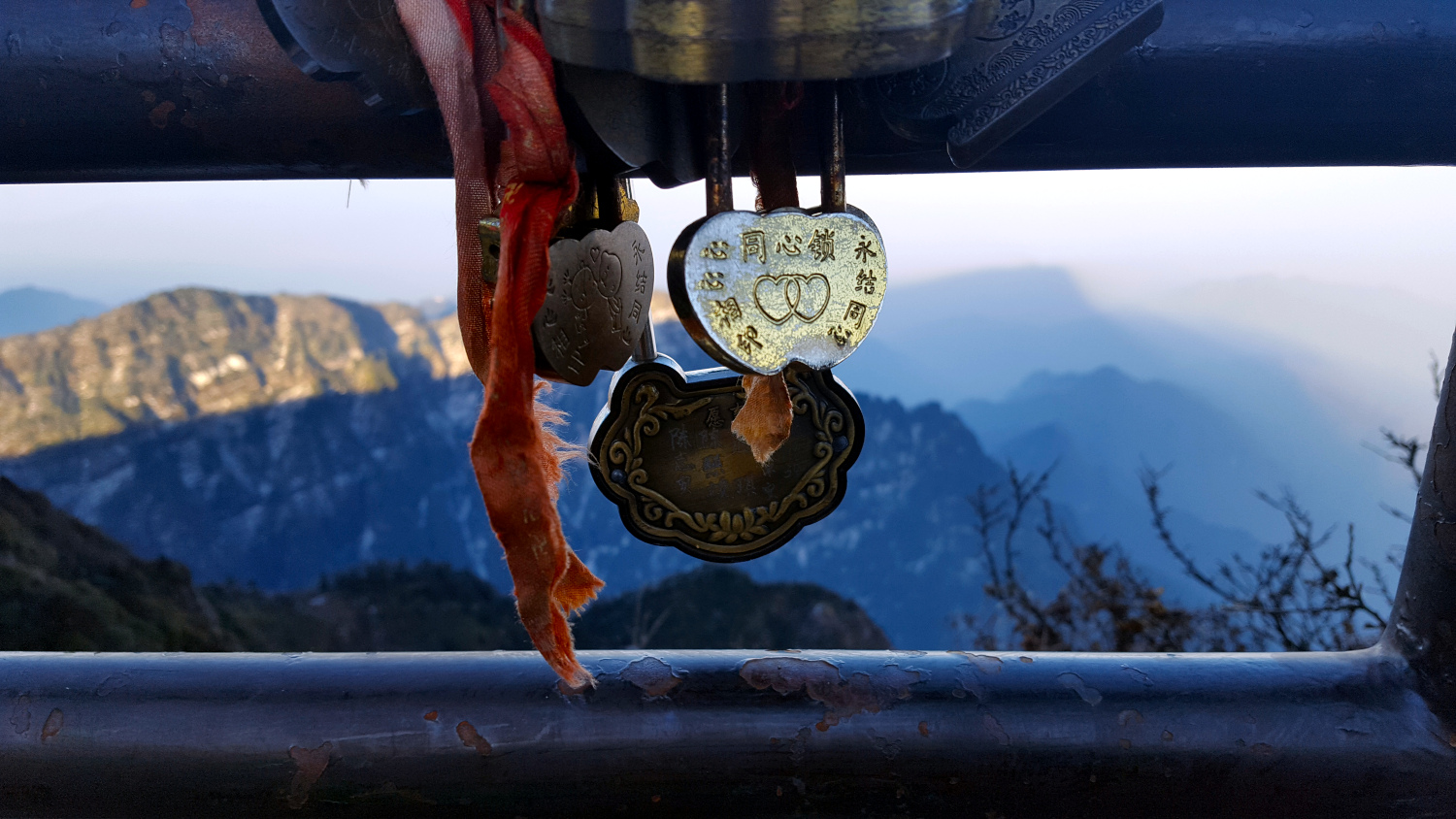