This week was Thanksgiving and it was hard for my flatmate and me to have the motivation to go on with beer tasting. We had one while I was fighting with a blunt knife and a pumpkin making soup and the other at the actual Thanksgiving diner. The theme of this tasting was licorice beer. We are both not enthusiastic about drinking beer mixed with licorice in general, hence we struggled finding more to say than "it's ok".

Why licorice?
Icelandic people have a strange relationship with licorice. It is everywhere. There is a liquor (Topas) one can find it in chocolate and cake and adding it to beer was probably only a natural consequence. On the other hand it is extremly difficult to find good pure licorice in the store. Even licorice only sweets, such as my childhood staple "die Lakritzschnecke" is hard to find. 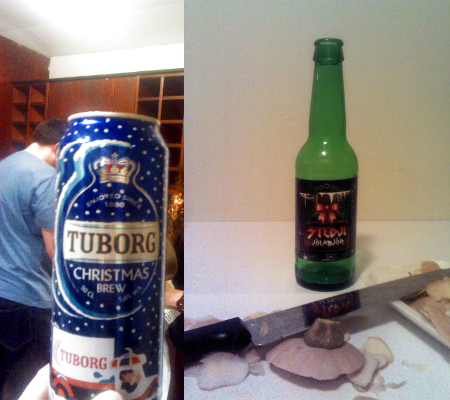 Steðji Jólabjór
Seðji is a Microbrewery in Borgarfjörður was founded in 2012 and it is very proud to be brewing after the German "Reinheitsgebot". It is also the brewery which invented the Icelandic "Whale Beer" a beer which actually contained milled whale bones and whose sole purpose of existence was to piss the rest of the world off and create hype for the then 1 1/2 year old brewery by using the old "we are proud independent people and no one can tell us what to do" nationalism, which seems to even work on my usually quite intelligent Icelandic friends.

Back to the Christmas beer, with licorice and no bones of any kind in itÖ
Christmassiness: The beer has a pretty red colour and is slightly sweet, in this way it tastes festive, however we both found licorice not to be a Christmas taste. It is well carbonated and light in taste, which makes me think more of summer beers.

Overall tastiness: The licorice and beer work together very well. It starts out tasting kind of sweet with a hint of licorice and then slightly bitter. When my friend first thought me a Chinese recipe she explained that Chinese dishes are based on the thought that all 4 tastes (sweet, salty, sour and bitter) should be in balance with each other. This was achieved here. There are a lot of subtle flavours, but also a lightness. It is by far the best licorice Christmas beer we tasted (comparing Egils Malt, this and the Tuborg Christmas beer below), but alas, we are not big fans of licorice beer. But I'm definitely going to try out their other beers, unless they have milled bones in them.

Tuborg Christmas Beer
Tuborg is obviously not Icelandic, but it is produced in Iceland and the Tuborg Christmas Beer is actually the most bought one and the first to be sold out or so I heard. I also heard that every special beer of theirs (Christmas, Easter) has licorice inside, because reasons I guess.
Christmassiness: No.
Overall tastiness: When I tried the Gull Jólabjór I imagined someone came into the brewery, dumped a bunch of oranges in one of the barrels with Gull Lager in it, came back after a month and decided that was the Christmas beer. This might also have happened in the Tuborg brewery, just they decided to dumb licorice in the barrel instead. Tuborg is more drinkable than Gull, but there is no harmony between the licorice and the beer.