This Thursday my union, the "Association of Academics" (Bandalag Háskólamanna) went on strike for half a day. It was a historical moment, as no one remembers when was the last time this had happened. Our union is an umbrella union, for any workers with university education who are employed by the state. This might seem specific, yet we have a great diversity of sub-unions. Most health care specialists are there, such as mine the union for physiotherapists (others are: occupational therapists, psychologists, radiologists etc). Most university employees unions(teachers, professors, academics, librarians) are part of this union as well. We also have the union of musicians, which is why we had an orchestra at our protest. We had great press coverage, as the union of broadcast journalists is also a member. And I found out that the union of dancers exists, when I saw their sign during the march.

As everyone else we have good reasons to strike, as I explained before purchase power is way below other Scandinavian countries as wages were never adjusted to the inflation after the crisis. I'm in the highest wage bracket and I'm doing fine, being single and living in a house share. I could not rent the flat on my own a raise a child on my salary. I'm also German, which means unlike most Icelanders I do not have a crippling student loan to pay back.
Workers were repeatedly told that it would "hurt the economy" if wages were raised. the union of ecomoists was marching with us, probably protesting this grossly false statement. The reluctance to listen to our demands had been apparent in these negotiations as well as the once last year, with the party from the state using delaying tactics, postponing meetings, turning up late, turning up unprepared etc. In the end it became clear that we would not be listened to, unless we would take action. Every sub-union had a voter participation of over 70% and each voted in favour of a strike with 65-100%.

The state still tried to have the strike declared illegal, a tactic they had used last year when the flight technicians and pilots went on strike and in 2004 when the teachers went on strike.
Three of the biggest unions are expected to go on strike in May, which would be the first general strike in Icelandic history. 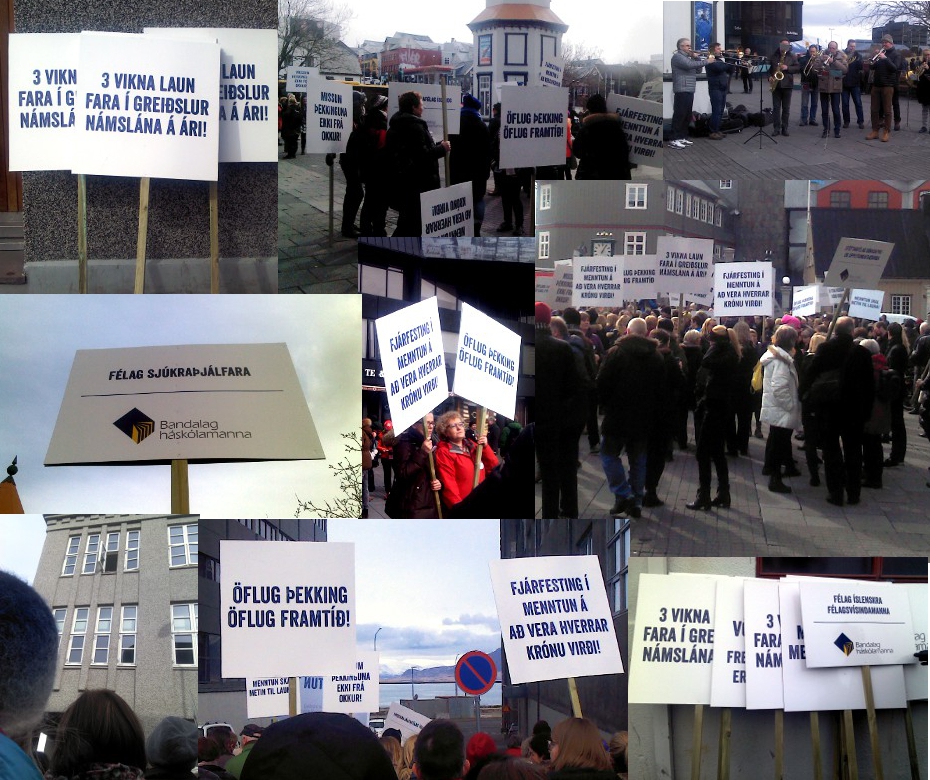