I wanted to talk about this book for some time, I have been reading it the past month and I love it. I do have to keep the discussion on my intellectually low level though, so I decided to follow the BBC series from 2016. I had watched this series before reading the book, which is why I did not give up this time. The first time I tried to read it the Russian names defeated me, especially in the second book, when Tolstoy keeps switching between calling Prince Andrei, Prince Andrei and Bolkonski in the narrative. Now that I had an image of each character in my mind, it was easier to follow. Part of this will be my random thoughts on the book and comparing the TV series to it. I read a version of the book, where it was divided in 15 books and two epilogues.

Paul Dano is a wonderful Pierre. Pierre is deeply flawed and makes hilariously irrational decisions throughout the book. He doesn't become comical or annoying in the book because of his kindness and emotional honesty, which Paul Dano is perfect for.
His introduction sets him up perfectly, showing his idealism and social awkwardness (I love the small detail of him just handing Anna Pavlovna his glass in this scene and her confused reaction on this complete breaking of etiquette), without making him look intentionally rude. 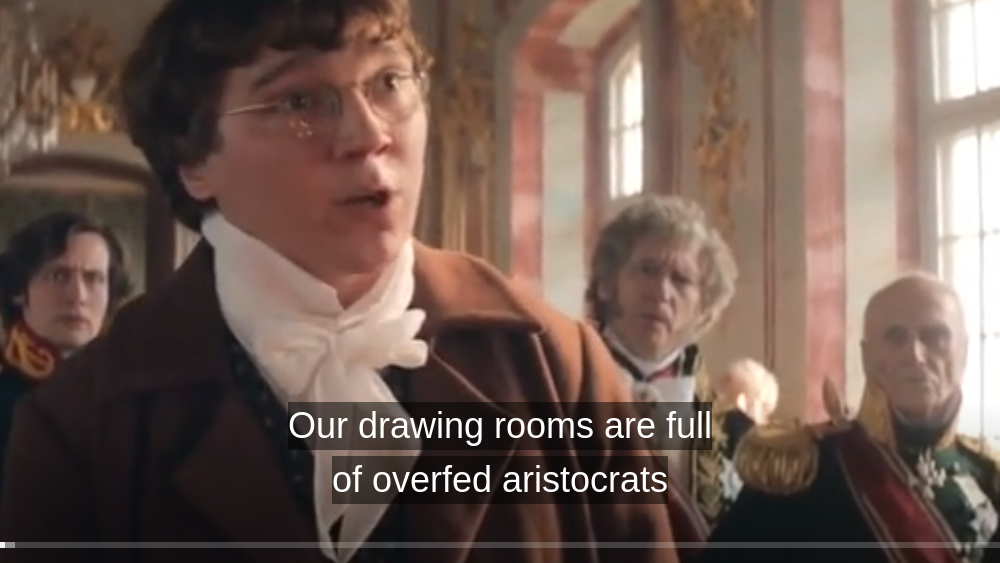 (He says in a room full of overfed aristocrats)

While his defense of Napoleon is funny, his interaction with Lise is peak Pierre, awkward, from a place of kindness.

His weaknesses are a bit tuned down in the TV series. His womanizing is only addressed in the first episode, the drinking is only mentioned once again. He is more confused here than weak willed (more about it in book 2 and book 5). They also have the party only in fast cuts, lessening the impact of Pierre's stupid behaviour, such as trying to copy Dolokhov's dare and the bear incident, focusing on his regret instead.

I like how some small details are kept, such as the servant drinking the wine at the party when he thinks no one is looking. Pierre is a big man in the book, somewhere in my notes it says "Stop body shaming Pierre, Tolstoy!" as he constantly mentions him being stout "He placed his stout body in a chair". Paul Dano plays him with big clumsy gestures without it looking comical.

Strangely the TV series then makes Pierre look a bit callous about his father dying by going to Natasha's name day party. (They do not mention that it is also her mother's name day party, who is also called Natalya). When Pierre comes to Moscow in the book, he is repeatedly told that his father does not want to see him, because of the bear incidence and that the shock of hearing about the scandal is what caused his stroke(s).

Pierre can dance in the book, he just does not know that particular dance at the name day party, but obliges Natasha, because that is who he is. He is not in love with her at this point (because she is 13 in the book), but it makes sense to change it for the TV series, where they are closer in age. In the TV series he says "I can't dance" and never dances again. Probably because Paul Dano did not want to. In the book, when he later moves to Moscow, one reason he is so liked is because he is always up for dancing to make sure none of the ladies have to sit around without a partner. He also can play clavichord.

Lily James is great as Natasha. She manages to play her like a teenager at the beginning. It is some very subtle physical acting, I don't think they needed that horrible fringe. I love that her main concern with the bear incidence is if the bear is alright (she asks twice).

Nice how Anna's Mikhaylovna (there are a lot of women either called Marya or Anna in the book, adding to the confusion) motivation to help Pierre later is set up by Vasili Kuragin refusing to give her an allowance from the inheritance at the beginning of the episode. Funny, if Vasili had said yes, he would have inherited, as Pierre would have never been able to notice the conspiracy to cheat him out of the inheritance. The death of the father is pretty much as in the book, with Pierre utterly confused and Anna guiding him through how to behave like a grieving son AND uncovering the conspiracy, securing him the inheritance.

She deserves the allowance for her son she'll get from Pierre. I like that they kept Vasili's line "we lie and deceive, but for what, it all ends in death" it is a nice bit of nuance for the character.

Andrei in the TV series is as insufferable as in the book. He is arrogant and even worse to his wife in the book. She is not portrait very sympathetic, it's a Tolstoy and women thing. His reason for going to the war is a bit different, in the book he thinks he is too good for St. Petersburg society and is looking for glory, even if it means getting killed, but glory not boredom is his main motivation.

Andrei's father is way too likable in the TV series at the beginning. I think part of it is the actor, he is really well known and plays usually sympathetic characters. He terrorizes his family, especially Marya (who is great) from the get go. Andrei knows this and his wife, Lise is scared of his father as well. Lise is in the right. She is pregnant with her first child and scared. Instead of being supportive Andrei sends her off to his family in the countryside, to a father she is scared of, away from her friends and proper doctors and goes off to war we to chase glory and maybe die.

I think fear is the appropriate reaction here, Andrei. You are going to be so sorry in book 4.


Notes:
One of my complaint is not enough French. Tolstoy uses the upper class speaking mainly French as one of the signs of their estrangement from the "Russian soul". Pierre even mentions it in the TV series in his rant about Napoleon: "Our drawing rooms are full of overfed aristocrats, who have no idea what real life is. Who have even forgotten how to speak their own language." And then the only French sentence ever spoken is this: 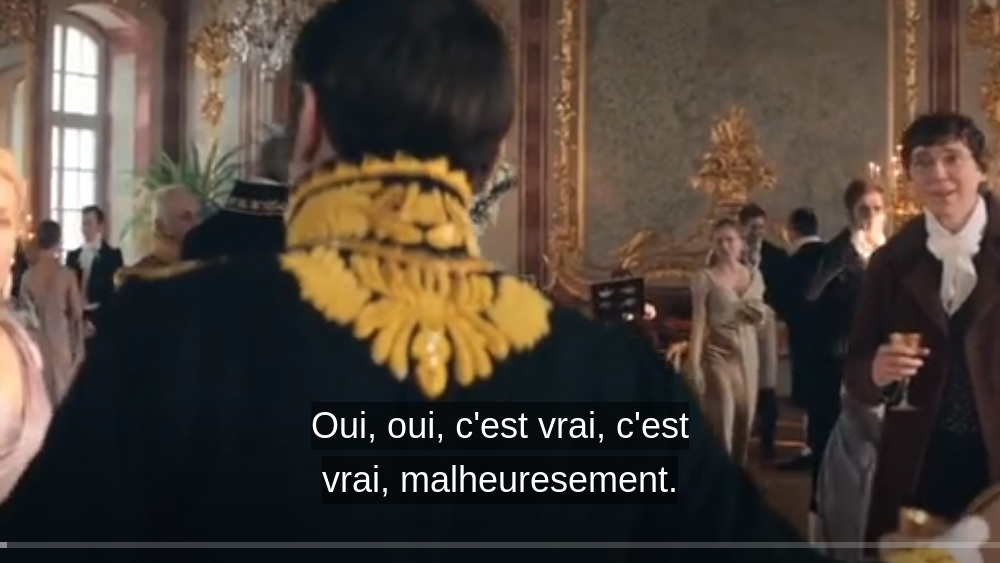 It would have been nice to have some characters speak more French phrases, the way Tolstoy inserted them in the book.