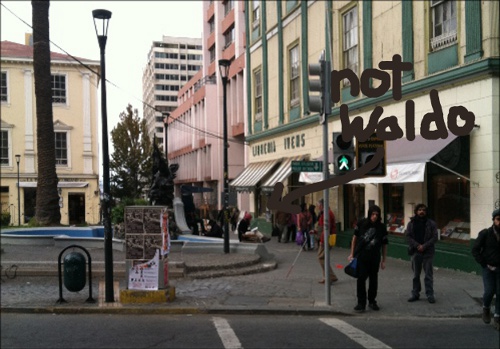 Also today I met a fellow German who ignored my offer to try the bread and simply stated:

trust a German to be rude...


after he tried my bread he asked me to send him the receipt...

No comments
Chile is not a coffee country. It does not grow any and the coffee culture can be expressed in two terms: Nestlé and Café Haiti. I think Nestlé isn't anything worth talking about, but Café Haiti is an interesting phenomenon. Here is what I heard from an unreliable source, but the story is fun! The coffee used to be horrendous, therefor the cafe had problems finding customers. So they used a time honored marketing strategy to get people to buy bad products; Girls in miniskirts. And behold! The coffee became wildly popular and soon other "café con piernas" (coffee with legs and no, this does not mean "to go") places opened up. Some of those had even worse coffee than the original, which lead to the unique creation of coffee places with blackened windows. On random times of the days, the establishment (I think if you have to blacken your windows the term applies) would lock the doors and the girls would take their tops of...

Everyone: Please send me some coffee, boobs simply are not distracting enough for me!

No comments
I have almost everything ready to throw the pe_pplog out there. But first I wanted to test the installation of it and especially the installation instructions. So yesterday, after several glasses of wine I handed my lovely (and patient) flatmate Shannon my computer with the task to install pe_pplog.zip. Poor girl had never even looked at a linux system before and it did not help that my computer is set up in German. She fought her way through my instructions and finally posted her very first blog post with this blog:

Now my installation instructions are somewhat more understandable and devoid of any Genglish...

No comments
today is the second day I'm going to set up my little bread stall on the street. Yesterday I ran out of bread after just 40 min, which kind of surprised me, as Chile is not a rye bread country. And I did have some to try, so people knew what they were buying! It goes to show I guess, that there is an interest in home baked goods, rather than supermarket bread.
It helps that my bread is awesome of course!

I'm not making enough money to be independent from my inheritance yet, but today I'm also going to look into making postcards from my pictures and I might start working in a brewery/pub. The pe_pplog version 1 is almost ready as well, but I won't make any money of that, I would already be awfully proud if there was one other person but me using it...