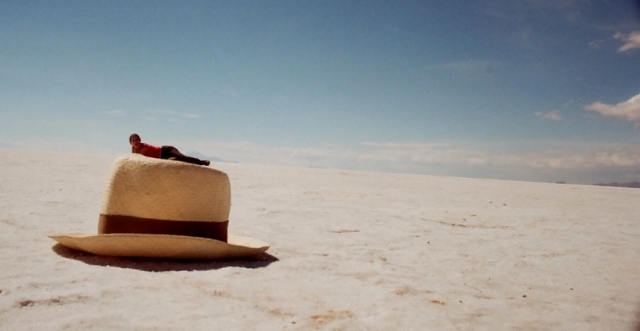 I went on a tour (unadventurous of me, I know) through the Atacama desert to Chile. After my jungle experience I learned my lesson and did some research on tour companies and went with the only tour company with positives reviews on trip advisor. So no alarms and no surprises. The group was the usual, and now a month later the only thing I remember is that the English speaking participants formed their own subgroup immediately. Maybe something about openness and learning another language. Or they just didn't like to listen to non-English accents. Or we non-English speakers simply sucked :)

Anyway, the Atacama desert, highest desert of the world is awesome, though cooooold. Lots of wind results in pretty stone sculptures and Bolivian soldiers hang out on the salt plains, waiting to invade Chile. Even houses are built out of salt here! It's pretty and it has flamingos, what more can I ask for.

Drunk and high while playing with dynamite

Bored kid from presatisfied western society that i am I went looking for adventure in the silver mines of Potosi.

The Cerro Rico was the root of Spanish wealth. In the highest city of the world slaves dwelved deep into the mountain mining silver for their colonial masters.
After Spanish rule the silver was all but exhausted and tin took its place, tinbarons having replaced the Spanish. Little changed for the miners.
Revolution and nationalisation of the mining companies changed their lot, working conditions improved until the price for tin collapsed on the world market in the 80s. The national mining company split up into now around 15 cooperatives who give out concessions to miners and oversee the work in different parts of the montain.

Concessions are only given to miners who have worked as "helpers" to miner holding concession for several years for safety reasons. And the mines are not an easy place to survive.

We were freezing when we entered them, walking mainly in a crouching position or wading through muddy waters even in the main tunnels at the upper level. But it soon got warmer, the air already warm and stuffy when we met the devil.
A teracotta figurine set at the entrance of the lower levels. It has paper streamers as hair, a cigarette is burning between the sharp teeth of the grinning mouth as a daily offering for good luck. The tip of its big penis is erroding slowly from the alcohol poured over it daily to ask for fertility.
The devil is the miners god, mother earth (Panchamama) his goddess. Tío Jorge (Tío = uncle is a misunderstanding of the Quechua speaking slaves of the Spanish word Dío = god. I can only guess that they harboured some strong feelings for someone called Jorge).
Every morning before work homage is paid to both of them. Tío Jorge gets his cigarette and coca leaves, some drops of a shot of 96% pure alcohol is offered to Panchamama, the rest is drunk.
The stuff is vile. My lips and throat burned only from a few drops. They use pure alcohol as they are asking Panchamama for pure metal. I wonder what came first, drinking pure alcohol or making up some reasoning for it...
Additionally they stuff their cheeks with coca leaves. High and drunk is the only way one can bear working in the mines.
We passed miners with glazed eyes sitting in 40°C heat after blasting another tunnel into the rock, the sharp smell of dynamite in the air full of dust. Three big men were sitting in a hole in the wall, working on their small claim of the mountain day in and out, hoping for that vein of pure metal that was going to make them rich.

The average miner does not live beyond 45 years, if he does not get killed in one of the many accidents, working the mine mainly with pickaxes or sledgehammer, 6 days a week while the toxic dust slowly detroyes his lungs.
Tourism as a new form of income has given some money in the hands of the cooperatives. Democratically organised institutions they try and improve working conditions and enforce safety measures as much as they can. Recently a compressed air system has been installed, before that the death by carbon monixide poisoning was the most common accident in the mines.
But the cooperatives cannot raise the price for tin, zinc and silver on the world market, nor can change the fact that the wealth of the mountain is almost exhausted.
But they can show the passing tourist how lucky they are to be a bored kid on the search for adventure.

Sheep are being transported on top of a minibus, no idea how they managed to get them up there and stay put. They did seem to enjoy the view.

Copacabanas Plaza de Armas is a nice place to enjoy an ice cream in the evening sun.

I bathed in the Fountain of Youth on the Isla del Sol, I will live forever...

St. Nikolaus put my shoes into Bolivia, as he claimed Bolivia is too big to fit into my shoes.